Buffering with rectangular end caps and not dissolving

I am using QGIS to attempt to achieve what should be a simple task.

I need to buffer a polygon layer with flat end caps, and without dissolving the resulting layer. In QGIS there are 3 tools for buffering:

v.buffer allows controlling the end cap style and whether the resulting layer is dissolved or not.

Fixed distance buffer in Vector > Geoprocessing outputs an undissolved buffer layer, however the edges are round and overlap. It doesn't seem possible to control the end cap type for the edges.

How do I achieve a discontinuous (undissolved) buffer with flat edges in the QGIS environment?

Upgrade to QGIS 3.2. The tools "buffer" offer what you achieve 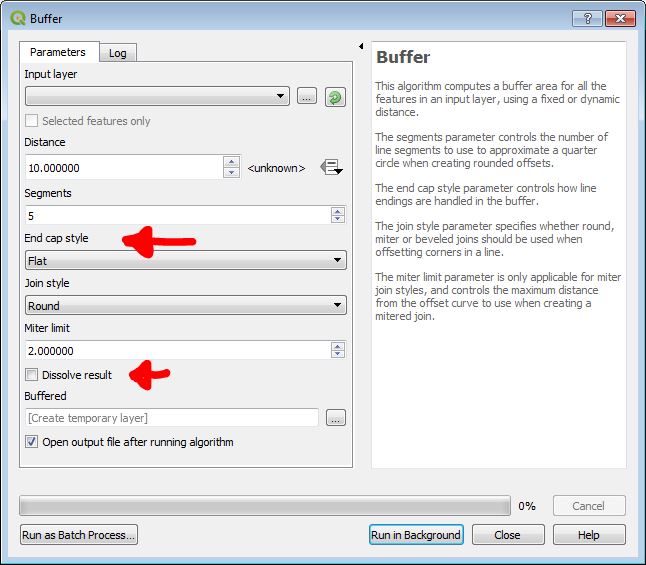 Not the answer you're looking for? Browse other questions tagged qgis buffer or ask your own question.

1
buffering very short line segments with a flat end
10
Creating buffer based on polyline without line end caps and without dissolving the created polygons in QGIS?
2
Buffer points by buffer amount in attribute value
3
Calculating mean for each buffer using QGIS?
1
v.buffer.distance without cap