How to get a date string to run in Time Manager?

I have in my Attribute Table two columns, one with dates and one with times (running in increments of one hour), so each feature has a basically a date and hour.

The example above shows multiple features at one point in time, but there are thousands of features and about 30 hours/timesteps.

I'm trying to get QGIS' Time Manager to read both into itself.

I tried creating a new column of data. I created a 22-character wide string and populate the column with

and it outputs the following 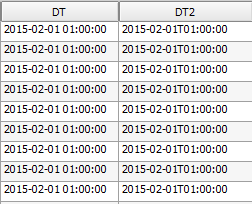 The second column I used

just to try this way as well.

So the output looks okay and I try to load the layer into QGIS, choosing one of my new columns. It defaults to "SECONDS FROM EPOCH (float)" and the slider starts at the beginning of UNIX time, 1970-01-01.

I saw this question from several months ago that seems to be similar to my problem but it doesn't look like they got a solution. Wondering if anyone can help me? I thought strings would work but perhaps I'm missing something.

EDIT: Here are the fields I have and their properties. Is there a difference between 'String' and 'string'? I created all the original fields in Fortran and I notice the new fields I made in QGIS are labelled as 'string'. 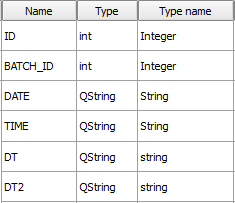 Interestingly, if I set Time Manager to treat the data as "SECONDS FROM EPOCH (float)" (i.e. manually setting it, rather than letting it figure it out), I get the following error

Some data to reproduce the issue can be found here, I'll leave it for about a day.

This works fine for me.

But bearing in mind that it is really slow.

To create the date_time field I used:

After creating that field, turn off editing and allow it to save. This took a very long time for me, with 500k features. I let it run overnight.

Then it worked fine in TimeManager, although slowly.

Exported images can be found here:

The solution that I managed to implement involved the process with which I write these files. So the solution is a roundabout method and doesn't directly address the issue.

Initially, I was writing a separate date and time column (of type String), 10 bytes wide and 8 bytes wide, respectively. I was under the impression the Shapefile format restricts database fields to a width of 10 bytes. It turns out that, for string/char at least, I was able to output a single column of both Date and Time, 19 bytes wide. Time Manager had no qualms about reading this column, even though the other methods I tried in the OP resulted in identical output (including when I checked and compared the binary of each .dbf).

So in the end I found a solution to my problem but it skirts the actual issue.

Not the answer you're looking for? Browse other questions tagged qgis timemanager or ask your own question.

2
How to create a 'dummy' DATETIME field for QGIS timemanager?