Change attribute of a line according to overlapping polygon features

I'm pretty new to QGIS and python in general. For my work I'm faced with a bit of a problem.

I got 100-m-segments of several streams and polygon-features of the surrounding substrate. The polygon features determine if sand, gravel or stones are the primary substrate in the stream segments. So I tried using a simple spatial join. If I do that however only the segments that are 100% inside a certain substrate are correctly joined. If a segment is overlapping with two substrates, then the bigger overlapping polygon (> 50%) should be used as the primary substrate.

Is there a plugin for QGIS (version 2.18) that can do this? Otherwise, how can I create a corresponding Python script?

I searched for hours and found similar problems only with two polygon features so I tried to modify a script but failed. (Percentage of polygon in one shapefile within polygon of another)

Here's an example of overlapping substrates: 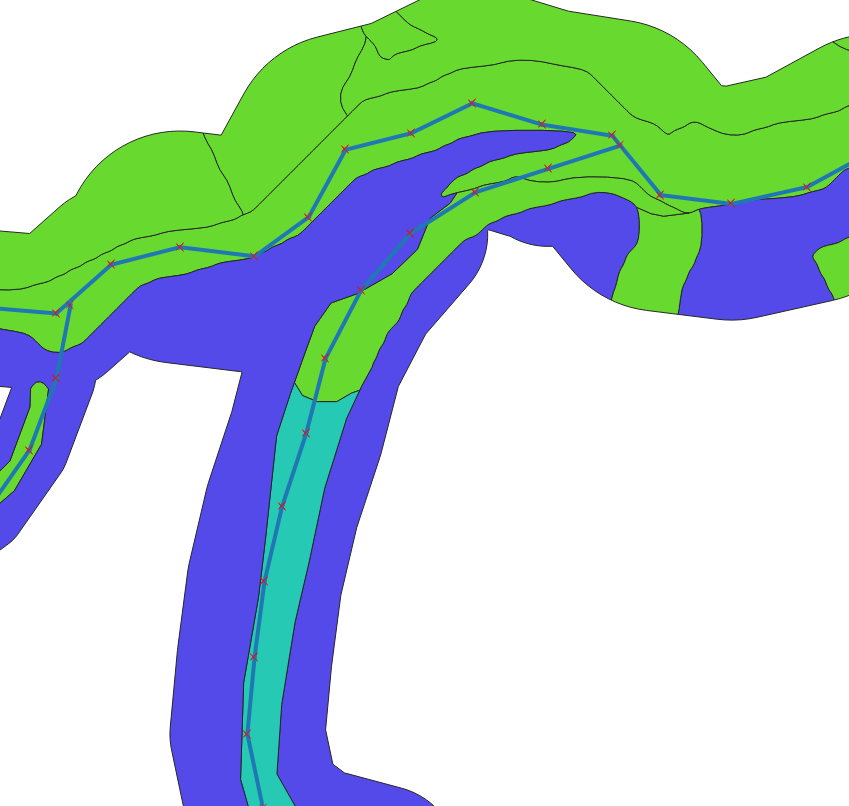 Then, load the polygons

The following loop creates a with the stream based on the largest substrate present. The area of overlap, between a stream and substrate is calculated using gdal's Intersection. It is stored in a dictionary and the sorted based on these numbers. That's the idea here. I have not tested the script, so maybe you'll have to do some edits.

If there is a problem, please ask! Hopefully this helps :)

Not the answer you're looking for? Browse other questions tagged qgis python attribute-joins spatial-join or ask your own question.

5
Spatial Join in PostGIS according to Line Attribute
1
Adding attributes to line feature according to adjacent polygon
4
How can I select all streams downstream of a polygon
2
Update values from layer one to layer two where there is no identical ID but identical geometry
5
Create frequency polygon from overlapping features in another polygon
6
How to use optional inputs in model processor for QGIS 2.18/3.0?
5
Summing attribute values of overlapping polyline portions in QGIS 3.0.3
3
Which buildings have access to nature where more than 50% of the nature area is closer than 3km?