I would like to batch-transform multiple shapefiles which are stores in several different folders.

Is there something I can do to transform the shapefiles with the correct attributes (and without additional FME-specific attributes)?

( I used a workbench with shapefile reader-->csmap-reprojector --> shapefile writer but tested also a version with a creator, feature-reader, csmapreprojector and feature-writer).

So the method to do this is fairly straightforward. I created a quick demo video here: https://www.screencast.com/t/7FIU8u4o

Written down the steps are: 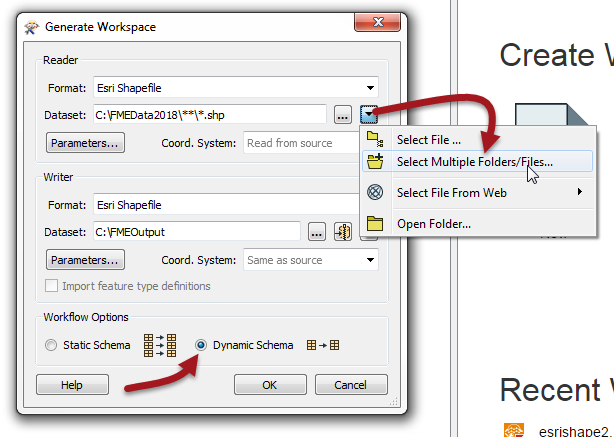 FME now runs and translates your data. Because it's a dynamic translation, the output has the correct attributes and not the attributes of just one of the files.

Again, see the above video for a demo/proof of success.

In addition to Mark's tip, there is a Tutorial at https://knowledge.safe.com/articles/1050/dynamic-workflow-tutorial-introduction.html that walks through the process in more detail.

Not the answer you're looking for? Browse other questions tagged coordinate-system fme or ask your own question.

3
Need links on DWG to GDB conversion using FME Workbench
3
How to read files one by one with FME
1
How to use fanout to accomplish batch clip in FME?
4
FME: Using WorkspaceRunner to batch 2 readers
1
FME Workbench: Merging Multiple Shapefiles into One Database Table
7
Writing Large Shapefiles using FME?
2
Pause and resume execution of FME workbench
0
Insert a mixed geometry type directory of shapefiles in a workflow with FME
3
Controlling processing order in FME workspace?