ModelBuilder adds numerous file extensions to outputs as it runs?

Using ArcMap 10.3 I am trying to create a model that will take all the shapefiles in a folder and convert them to KML files. I first create an inline variable for the shapefiles in the folder, then when I convert them to feature classes in a geodatabase (because the layer to kml tool needs layer files as input), my output ends up at %variable%.shp.shp.shp.shp... etc. Then it fails on the next tool, which is converting those feature classes to layer files. I have attached two screenshots.

Does anyone know why I might be getting multiple .shp extensions when converting shapefiles to feature classes? 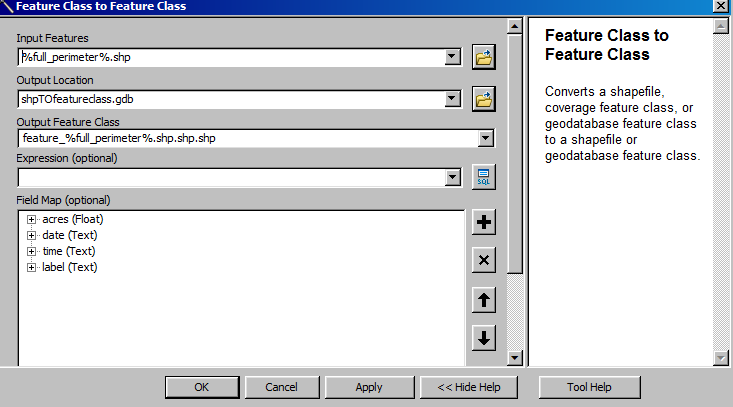 When using an inline variable you dont need to type the .shp extension afterword. It will be automatically assigned.

Export your tool into a script and add these 2 lines according to your files, wherever you are giving names.

MegastarMegastar
1
Add a comment  |
-1
Want to improve this post? Provide detailed answers to this question, including citations and an explanation of why your answer is correct. Answers without enough detail may be edited or deleted.

Split the name of the file using a dot (.), use the first part for name and add extension using a + sign.

Not the answer you're looking for? Browse other questions tagged arcmap shapefile modelbuilder kml or ask your own question.

3
How can I convert lots of ASCII files (.xyz format) into shapefiles by iterator in the Modelbuilder of Arcgis 10?
5
Iterate Workspaces in Modelbuilder not executing all tools
4
Are ESRI Shapefiles and KML files two different ways of representing data?
0
Extruding Height in ModelBuilder of ArcGIS Pro?
1
ArcMap doesn't recognize geodatabase files under "Add Data"
2
Features are displayed as inline-variable
3
Ensuring that polygons rather than multipatch features are created by ArcGIS KML To Layer tool?