I have a layer with several polygons and want to extract the "mid/center-point" of the touching borders/lines of adjacent polygons. Despite trying several methods, I do not know how to achieve what I had wanted.

What I tried recently:

But Explode lines just splits at all of its vertices. I am thinking that the steps might be to: 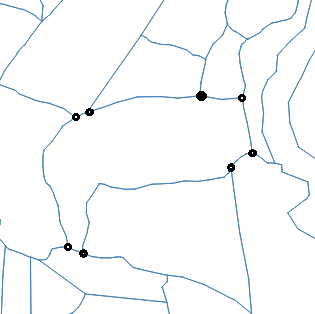 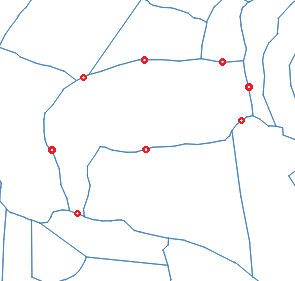 What are the steps and algorithms needed to achieve this (extract/get the red dots as shown in the image)?

Update: I tried QChainage plugin but not all common vertices were extracted (like these green circles): 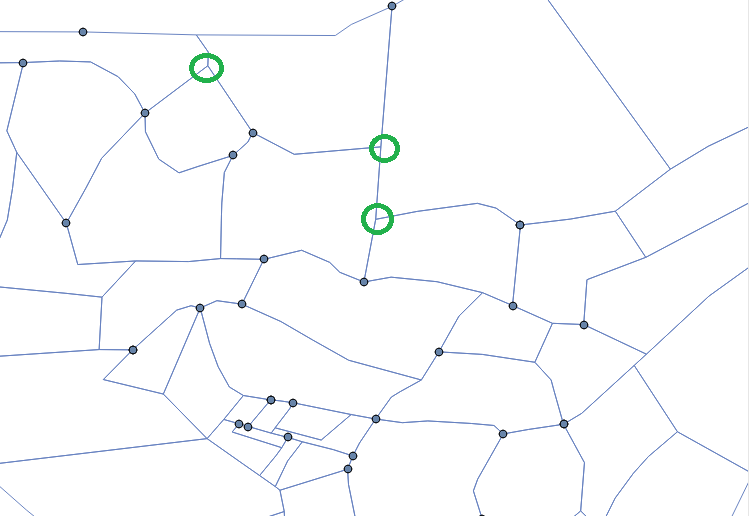 It seems that your lines are not topologically correct, in that some of your lines are touching other lines' endpoints without being split into a new line. To fix this, use Processing Toolbox > GRASS GIS > v.clean and select the "break" option for the "tool" parameter. That should break all of your lines into individual segments.

Not the answer you're looking for? Browse other questions tagged qgis vertices extract adjacency or ask your own question.

25
Creating Thiessen (Voronoi) polygons using lines (rather than points) as the input features?
11
How to get or assign vertex id to polygon vertices and use these as vertex label using pyqgis?
8
Converting polygon to lines without duplicate edges?
8
Splitting self-intersecting line at only one point using QGIS?
1
Calculate the distance between points and the start of each lines
1
Generate node / vertex at starting point of line connections
1
Split lines by minimum number of overlapping/shared vertices
3
Split Polygon At Vertices While Maintaining Arcs