CreateTable_management as part of a script tool fail

I am trying to create a table as part of a script tool, and it always fails with error 999999.

The general idea of the script is that it is calculating proportional coverage of things in a series of buffers, and the tables are needed to compile the results.

The code I'm using creates the tables and works fine in PyScripter and also works fine in the Python window within ArcMap, but will not run as a tool and fails at the create tables part.

I'm not sure if part of the problem is that I'm trying to access the path names and files via the GetParamtersAsText function or not. I have tried countless ways of naming the outputs in the CreateTable_management function. I'm not sure what I am missing here (maybe I need output parameters).

Here is my code (the relevant parts of creating the tables):

I've tried using Delete_management to delete the table ahead of creating the table with no luck, and have tried commenting out the first table, but get then get the same error starting with the NatForest_Table.

Here is the print out from the Results window for extra info: 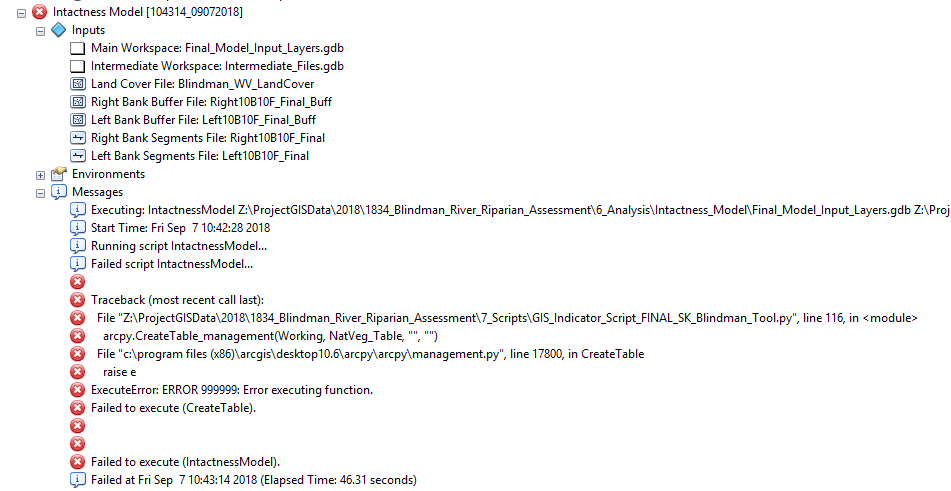 Here are the parameter configurations; the buffer files correspond to parameters 3 and [4], and all the input feature classes are configured the same way. 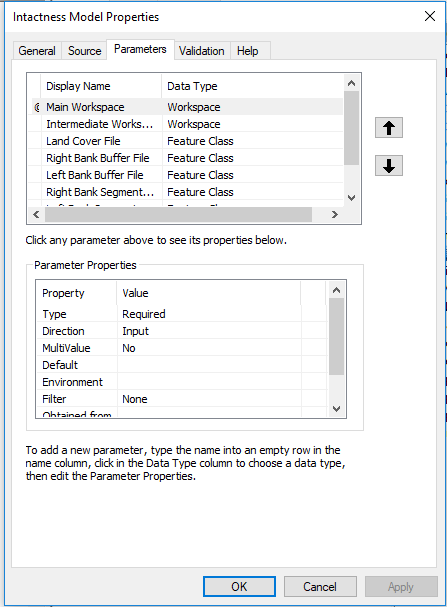 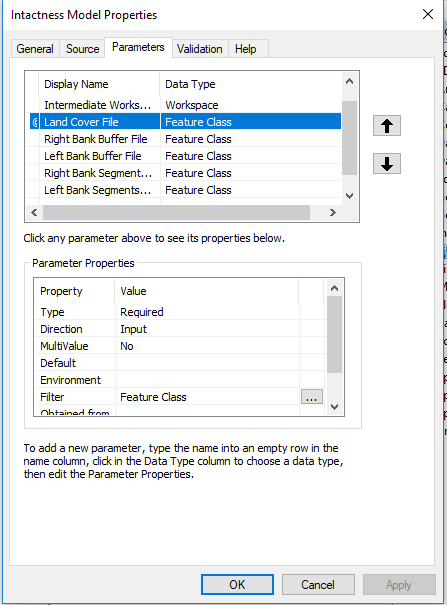 (This answer is based partly on guess-work, as there is not enough information in the question post to know if this is the cause or not.)

Assuming that there are no more instances of arcpy.GetParametersAsText() elsewhere in the script, then it is unusual that it references parameters 0, 3 and 4 without any parameter 1 or 2. Indeed, the script as posted would ignore the second and third paramters of the tool completely (parameters 1 and 2).

If the tool does actually have only 3 parameters, then you should change these lines:

If this is off the mark, then please edit your question post to include a screenshot of your tool's parameter configuration.

I finally figured my issue out: The original reference was this:

and the problem was the order of the naming AND not referring to the name properly in the Create Table operation. Using arcpy.AddMessage(NatVeg_Table) to see what was being called showed:

which obviously can't be followed. The fix was this:

This corrected the order of the name (removed InC1 from the front and placed it at the end of the name), and allowed the table to be created properly within the CreateTable operation by using os.path.basename to remove the path name from the table name.

Not the answer you're looking for? Browse other questions tagged arcpy table python-script-tool error-999999 create or ask your own question.