I have created two georeferenced orthomosaics using dronemade images. I used OpenDroneMap and Pix4D for that and I used the same source images for both.

I thought that if I used the same images, the results should overlap perfectly since the exact same source has been used. The problem now is that the Pix4D generated result seems to be shifted a little to the left and I don't know why that is.

The following images show what I mean:

This is the ODM result, which alines perfectly with the Google satellite basemap. 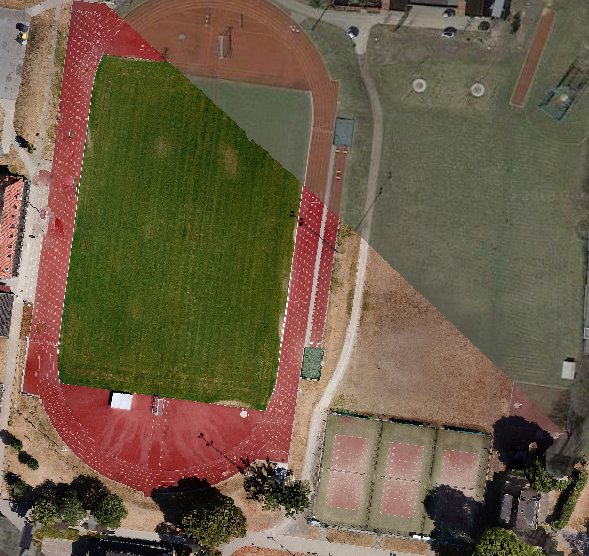 This here is the Pix4D generated result and it doesn't align at all, it is shifted.

The used .tiff files can be found on my DropBox: https://www.dropbox.com/sh/tcoo03aqqflx5ht/AAC-emzFz7z0Ne1P9FY0LVc-a?dl=0

I am pretty new to GIS.

I would recommend you set up enough GCP's in both software packages. I know that Pix4D allows for that in a pretty straight forward way -for instance following this tutorial. For OpenDroneMap the documentation is a little bit more scarce but without too much searching I got here. I presume each of them is relying on different algorithms, but adding enough GCP's will definitely make the results comparable.

Not the answer you're looking for? Browse other questions tagged coordinate-system geotiff-tiff datum pix4d opendronemap or ask your own question.

4
Problem converting georeferenced jpgs to geotiff - image is shifted/warped
1
Feature classes not aligning despite use of Project and Define Projection tools
5
OpenDroneMap: How to produce correct georeference ortophoto from UAV?
3
Alignment problem in 2 vector shapefiles with the same projection
0
QMS basemap opening up in wrong CRS and GPS points (maybe?) showing in wrong place
3
QGIS 3.6.1 problems with CRS
1
Why the “shape tools” won't work with a different CRS?
8
Layers misaligned in QGIS