So I have a table that stores a bunch of traffic counts for various road segments across the country. I'm regularly getting real-time location data from vehicles that are moving around a given region and I'm trying to match the segments that correlate to the path it traveled. In order to fill in some gaps in where the vehicle has traveled, I'm using Mapbox's Matching API to snap to roads. This is good for getting a general route that the vehicle may have traveled, and is returned to us in an encoded polyline. In PostGIS I'm able to decode this polyline, use ST_Segmentize to fill in any gaps between 'snapped-to-roads' points (to avoid missing any small segments) and loop over these points to find the closest segment geometry they match to. This is fine, and it technically works, but it's really slow. I'm hoping to find a faster/better way of doing this.

Edit: In case anyone was wondering, the reason we break the segments into distances of no-greater-than .000032 is to make sure we capture even the smallest road-segments when breaking up the encoded polyline.

This is what I have so far (apologies for bad formatting):

Here are some pictures as per-request:

So we initially are given two sets of lat/long coordinates. We use MapboxMatching to fill in points on a road that a vehicle could have traveled to get from point A to point B. Mapbox returns us an encoded polyline that looks like this on a map: 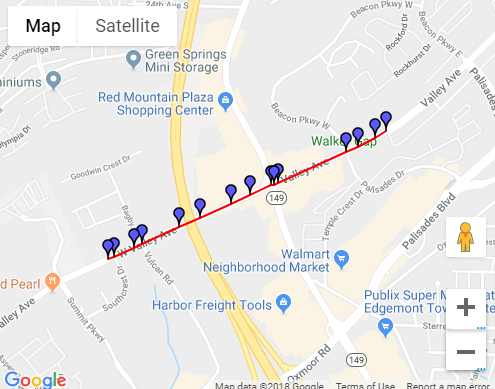 But, the issue with this, is that sometimes those points in the encoded polyline are too far apart. They may miss some of the smaller road-segments along that path. So we segmentize it to interpolate additional points into it. 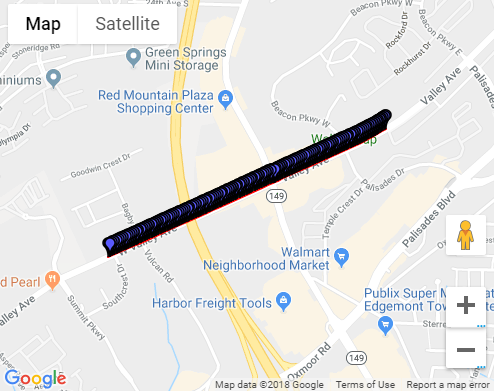 Then I want to get all the possible segments it passed through from the geometry table. Each row in the table looks like this:

The reason we use distance to get the nearest segment from the table is because the snapped-to-roads geometries don't necessarily match up to the stored geometries. The geometries in the database may veer off the road slightly, making it to where contains isn't viable (to my knowledge). Hope this helps

This is referred to as the (K) Nearest Neighbor search; the linked answer and plenty similar on this board will have more details about it and its usage in PostGIS, including some possibilities to increase performance further.

For now I assume there is, at least, a spatial index on the <segments_table>:

This will find the closest segment to each point, with the DISTINCT ON excluding duplicates, and ordered by the path of the dumped points (the outer query is necessary because DISTINCT ON requires its field to be first in the sort order)

The <-> operator should use the one index at least (since the points are not index searchable, non-SARGable), speeding things already up a lot.

As I assume you are working with Lon/Lat (.000032 degrees?), I also used a cast to geography; that increases overall precision and let's you define the segmentation interval in meter (at a tiny cost in speed); note, this will also assume those Lon/Lats to be in EPSG:4326. I also added that to the distance calculation, again for precision and meter as return unit. Just reverse all that to your version if you have your reasons.

No function involved here, but you could add it to one like yours easily; just replace the loop.

I hope I haven't overseen something.

Not the answer you're looking for? Browse other questions tagged postgis postgresql nearest-neighbor postgis-2.3 knn or ask your own question.

4
Get the lines between all points of a polygon in PostGis : avoid nested loop?
1
Matching GPS points to the road network
5
Getting the distance traveled across road segments
3
PostGIS snap line segment endpoint to closest other line segment
2
ST_Distance does not give nearest node
2
Correction of GPS-Track, snap to road (line, network)
3
Linking points and line layers
4
Update points geometry while snapping them to nearest line
0
How to add links to a GIS road network, for example, for ferry routes?