I am having some trouble with tauDEM that I am hoping someone can give me some advice on. I'm running tauDEM via command line through R-studio. I am working with some 30m resolution SRTM DEM data in geographic projection to do some very simple hydrology GIS:

In doing this though, I end up with NA's (not 0's) all the way down some (but only some) major rivers.

I tried burning in one of the streams since it is happening in along a very flat meandering/braided river floodplain in one case. This did not help. I tried running D-infinity algorithms instead of D8, on both a burned/non-burned DEMs and got the same result. If I bring in the resulting flow accumulation to ArcGIS and zoom in on it, I can SEE the river clearly as a line of NA's!

I don't know what is going on. I don't think it is running out of bit depth for the number of accumulated cells since it is being stored as a 32-bit raster (I don't know how to control this either). The DEM is not very large in file size (~48mb) and the process is completed very quickly on my Windows 10 PC: Dell Precision 7510, Intel 4-core XEON CPU @2.9GHZ (overclocks to 3.4GHZ as needed), 64GB ram, 1TB SSD, 2TB HDD.

I am hoping someone has encountered this problem and can tell me what is going on. Links to the data are just below, followed by my R code. I attached a couple plots of the resulting log(flow accumulation) including one with a missing major river plotted in blue. 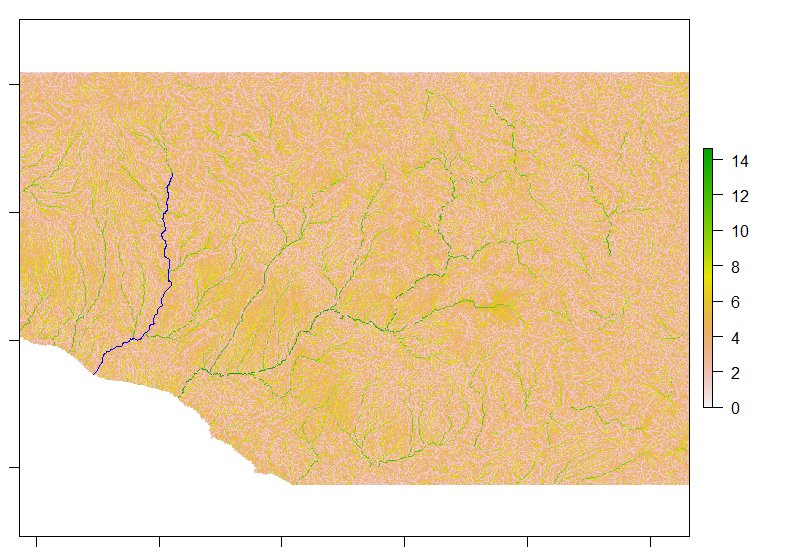 I would add the -nc argument to your AreaD8 run to see if that resolves your issue. If your full watershed isn’t captured within your DEM, that could be the cause.

As per the AreaD8 help on page 19 of TauDEM 5.1 GUIDE TO USING THE TAUDEM COMMAND LINE FUNCTIONS

Not the answer you're looking for? Browse other questions tagged r hydrology flow-accumulation taudem or ask your own question.