The data set in question was made using .las and .zlas files from respectable sources.

Data set 1 was collected in the Fall of 2014. The RAW flight line swath data was processed to create classified LAS 1.2 files formatted to 742 individual 1500m x 1500m tiles. The vertical accuracy is 18.3cm at the 95 percent confidence level. The horizontal accuracy is 1.04m at the 95 percent confidence level. The comprehensive metadata files will be made available.

The data was processed using Arcmap 10.5.

The two datasets had different sized tiles that overlapped in several areas. The larger tiles below are from the NRCS 2012 dataset and the smaller tiles are the SDGS 2014 dataset. 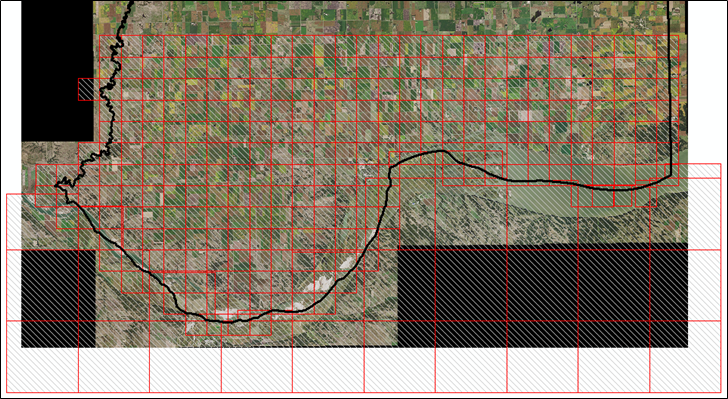 The Tile LAS tool in the 3D Analyst toolbox was used to create a new LAS dataset with uniform tiles. Rearrange_Points option was checked under LAS options. This orders LAS points according to their spatial clustering. The target file size was set at 250MB.

The result was a new LAS dataset with uniform tiles 250 MB in size. This took about 7 hours of processing time. 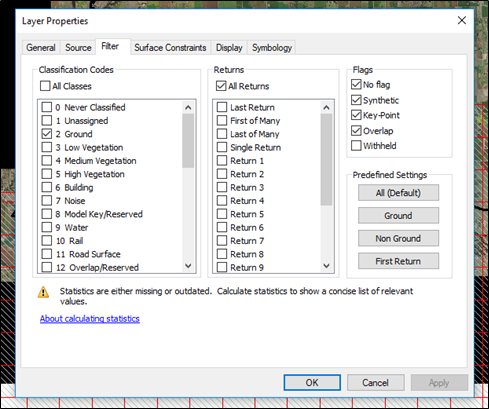 After the LASD layer was changed to show ground points only, the LAS Dataset to Raster tool from the conversion toolbox was used create a raster dataset. This required a new file geodatabase to be created for storing the new output files. The interpolation type was set to triangulation and the method was set to natural neighbor. The grid cell size used was 10 x 10m. This took about 4 hours of processing time. 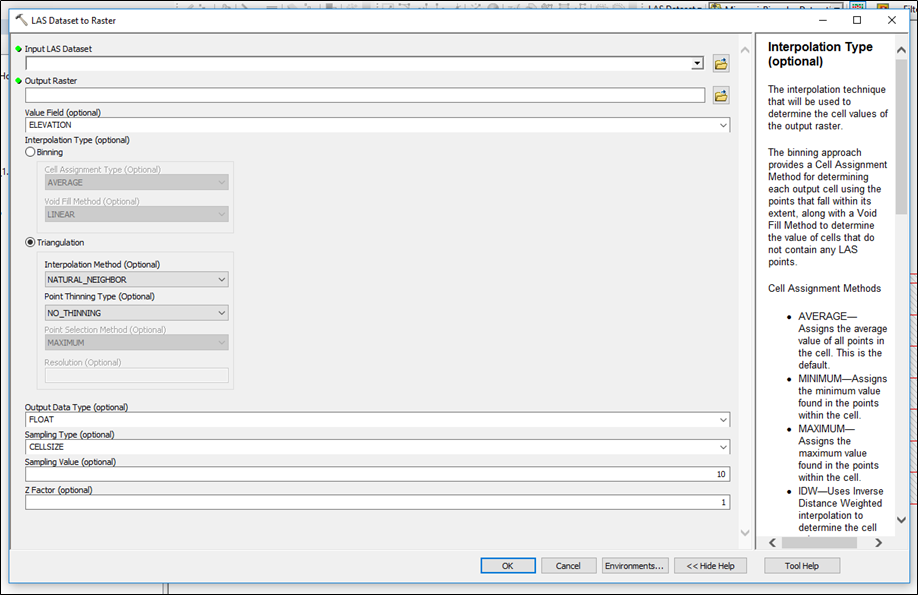 The resulting raster dataset is below and is now a bare earth DEM. The dataset came out as expected however there are some areas on the eastern part of the river that appear as white specs. I think these are most likely areas where there were no ground points.

Can this be fixed by using the Binning interpolation type?

My main question was to ask the forum if there is a better way to combine LAS files like this. I'd like to make another data set of the same DEM but use .las files from a third data set with higher vertical accuracy. I have reserves about this because I am not sure what the Tile LAS tool does to the data points. Like I don't know how using this tool affects the accuracy of the final DEM and if there is a way to keep track or recalculate vertical and horizontal accuracies for the final DEM. I have limited processing power and the final DEM will be used for stream geomorphology analysis.

Here are some suggestions to test and try improving the processing workflow.

The 'white specs' seem to be a consequence of having outliers in the raw point cloud. Have you checked them? You can look at the Las Dataset Properties, column 'Z Max' (see here).

In case you find them, take a look at:

Make sure the cell size used when generating the DEM is adjusted accordingly from the point cloud spacing (you can see which it is in the Las Dataset Properties as well, column 'Point Spacing').

Also, take a look at:

In case you need a DEM with lesser resolution than the point clouds have (for example, DEM with 10 meters, and point clouds with ground point spacing equal 1 meter) consider thinning them to improve performance in subsequent processing steps (see the Thin LAS tool).

The 'triangulation' method is usually better than 'binning', but you can also test other methods and tools (see Jeffrey Evan's answers in Pixelated DSM using LAS Dataset to Raster? and Interpolating LiDAR scattered ground data?).

This won't make Las Dataset to Raster tool work with only ground returns. You need to create a LAS dataset layer filtered by class code 2. Take a look at the Make LAS Dataset Layer tool. Also:

If for any reason you need to reclassify the ground points, see:

I don't know if a 18 cm difference in vertical accuracy between point clouds is decisive when generating a DEM for stream geomorphology analysis. The horizontal accuracy above 1 meter might bring some noise depending on the terrain steepness.

Make sure to also analyse other important aspects from metadata in both datasets. For example, if they have same Coordinate Reference System, if ground points were classified with the same method, etc.

Tile LAS was used accordingly, i.e., taking advantage from ESRI's suggestions: tilling (and rearranging of points) will not only improve performance (when creating surfaces), but it is also required in operations that rely on a file-by-file analysis (for example, point spacing estimate, which is essential for ground classification algorithms and DEM cell size definition, among other analysis).

Just make sure you always keep a copy from your raw .las files, so you can always start over if something needs to be improved.

Not the answer you're looking for? Browse other questions tagged arcgis-desktop dem tiles lidar accuracy or ask your own question.