I've build an image overlay in Google Earth, but I want to add some other layers via QGIS. In QGIS 2.18.15 on Windows 10, the kmz files just open by adding a raster layer. But...they're clearly wrong. The information in the doc.kml file appears to be a bounding box and the display in QGIS looks like the aspect ratio is wrong, as if the rotation parameter was completely ignored.

So what's the magic to make this work? I have no idea where to start on this and my Google-fu trying to find an answer has failed me.

I'm trying to add a couple of images, but they're not showing up...

Here is the Google Earth Overlay. Note that aspect ratio of the image. 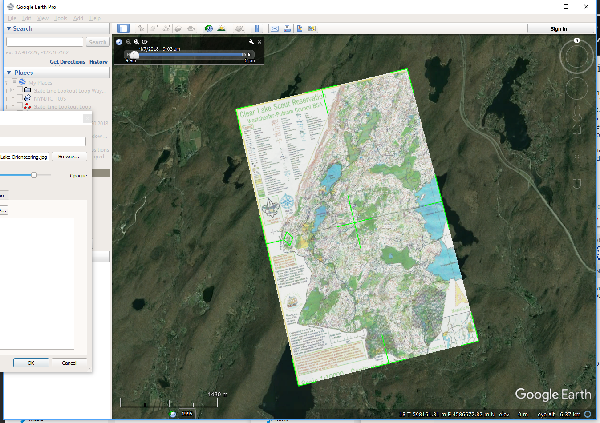 Here's what happens when I load the kml into QGIS: 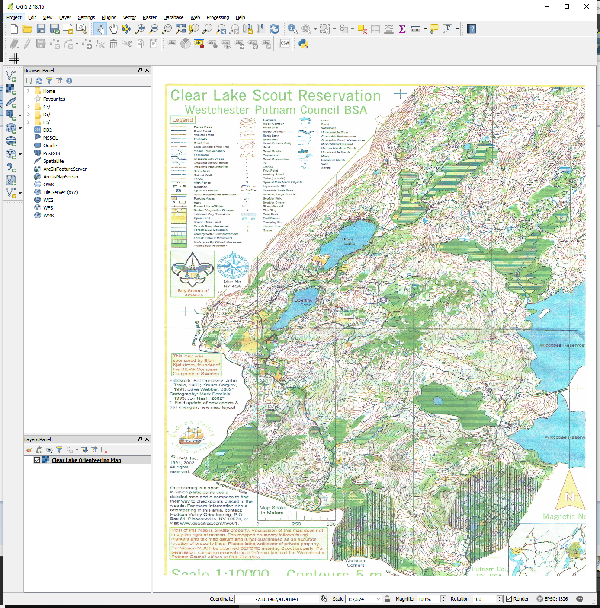 The aspect ratio is wrong, and I really expected north to still be "up".

The QGIS CRS is EPSG:4326. I think I tried forcing EPSG:3857 based on something I found elsewhere about Google Earth, but there is no visible different. If I add the north arrow to QGIS, it points straight up, aligned with the image. Not that the original map is an orienteering map so the north lines on it are in fact magnetic north. What I was aiming for was to pull it into QGIS after getting it calibrated via Google Earth so I could layer a UTM grid over the map.

Here's the doc.kml extracted from the KMZ file:

Something you might want to consider (now or in future) is to use the Georeferencer plugin in QGIS to do this kind of thing. You can load e.g. Google Maps into a QGIS layer using the Quick Map Services plugin1 then use the Georeferencer to, well, georeference your image against it. On occasion the plugin can be a bit finicky but over all it works very well.

A tutorial for doing this is available.

Not the answer you're looking for? Browse other questions tagged qgis-2.18 kmz or ask your own question.