I have two PostGIS tables with geometries. One with number attributes and one with letter attributes. Each table has two features (rows). 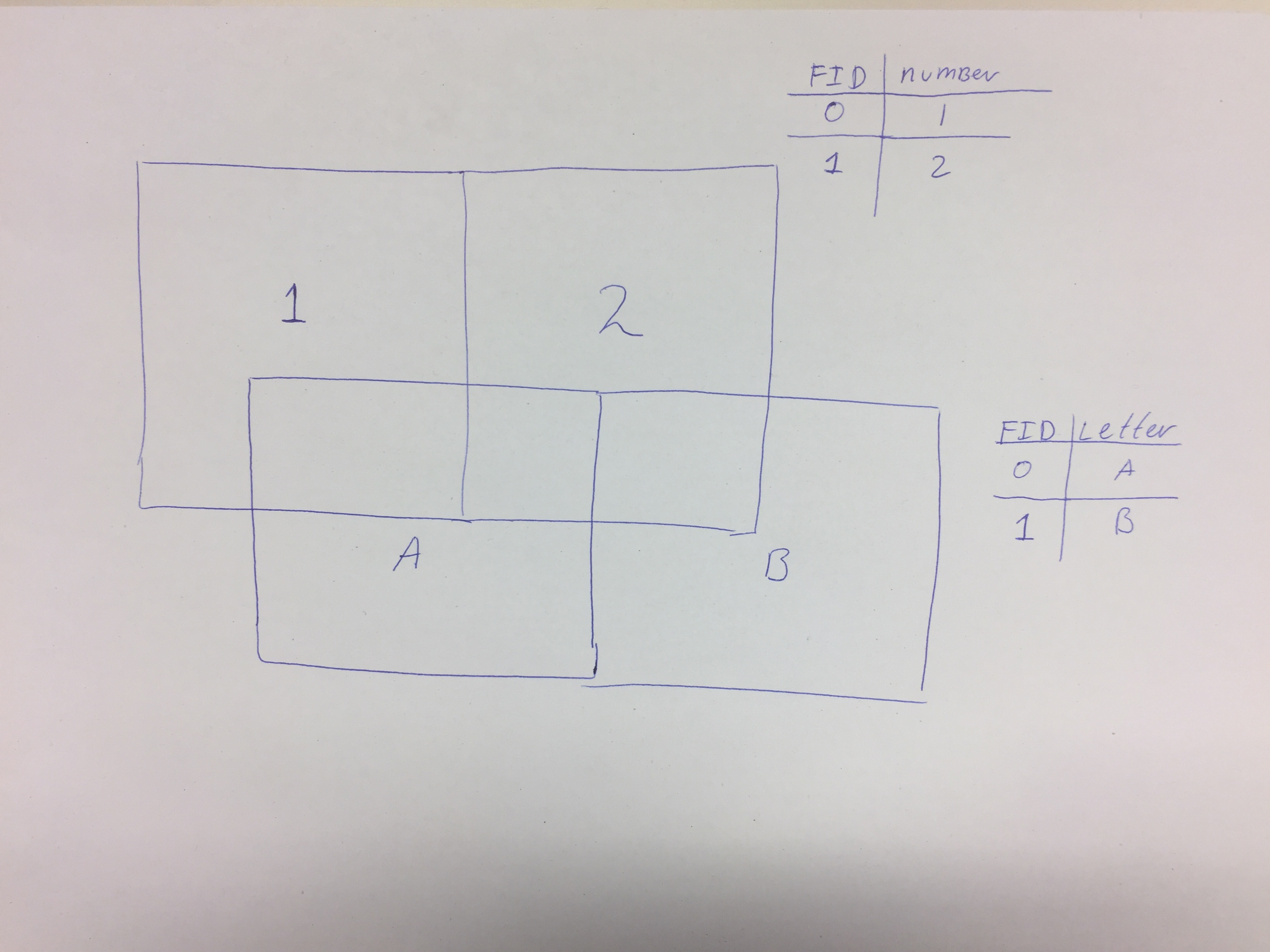 I would like to apply a operation on both stables so that I create the following result: 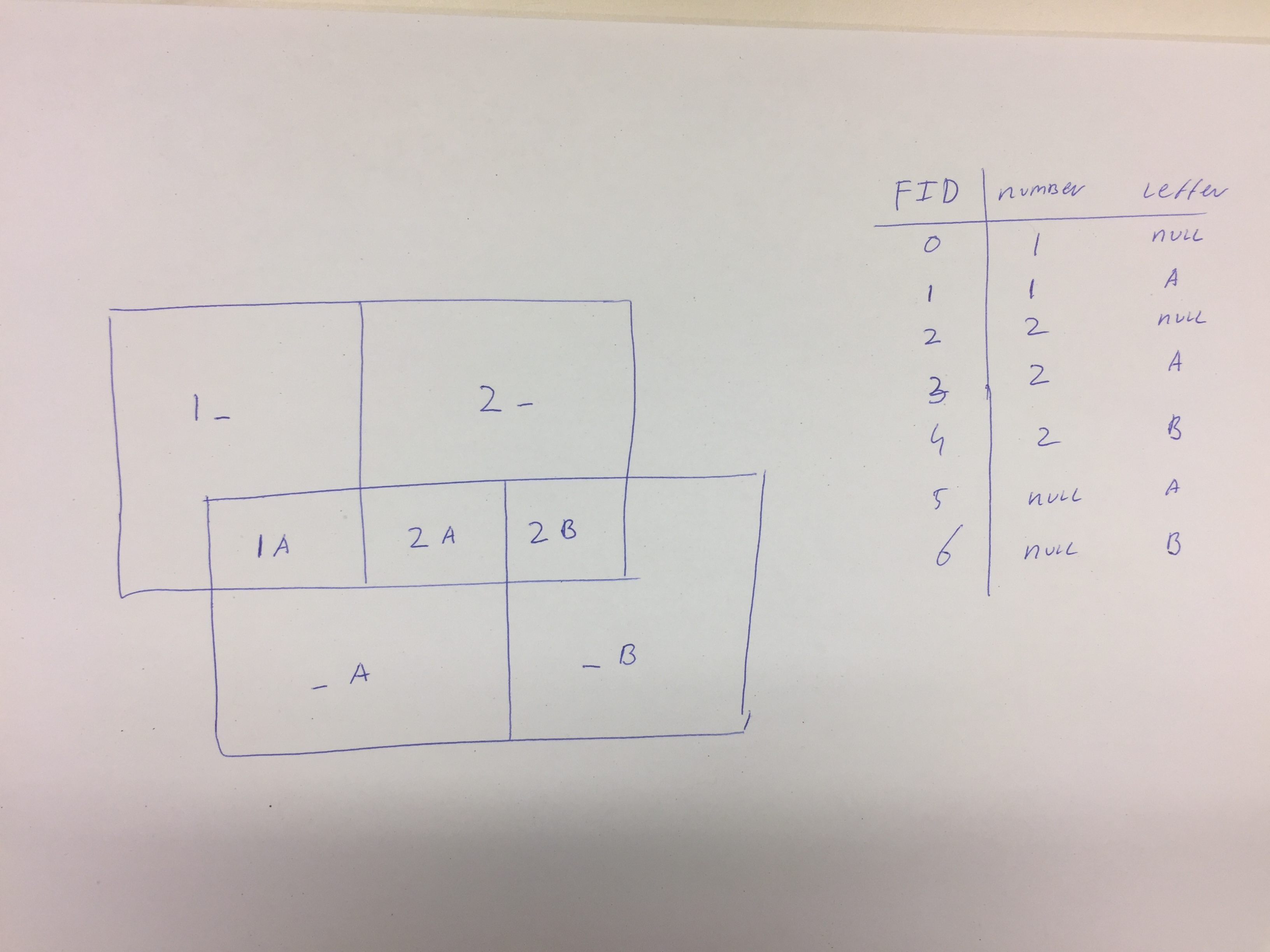 The resulting table has 7 rows and contains all attributes from the input tables. Some features have both the letter attribute and number attributes.

I struggle to obtain this result using PostGIS / SQL. So far I've only been able to create the features that have both letter and number attributes.

Is there a way to include the remaining features in the same query? I could also create multiple tables and perform a join but this is a non-parsimonious solution. I've also tried ST_Union to no avail.

In ArcMap and Geopandas this is often referred to as "Union" without dissolving however as far as I can tell ST_Union in PostGIS does something different. http://geopandas.org/set_operations.html https://desktop.arcgis.com/en/arcmap/10.3/tools/analysis-toolbox/how-union-analysis-works.htm

You need the union of three sets:

1) the intersection of the two tables - has two values, one from each table.

I would turn the first set into its own table, then select the pairs of values from the two tables that show up in that table of intersections, and make a table of the ST_SYMDIFFERENCE of the two polygons. I believe that would give you groups 2 and 3 in a single pass. However, that only works if any given member of table 1 is intersected only by one member of table 2, and vice-versa. If so:

Then make a union of the intersections and the non-intersections. I'm sure there's one really big SQL statement that would do that with no temporary tables, but I treat SQL databases like a calculator.

That code also assumes that the "Table1 value" and Table2 value are also primary, unique indexes. If not, you'll need to pull those in.

That's avoidable with a bulkier bit of code: you have to make all the members of the INTERSECTION_POLY table that contain the same value from Table 2 into a "multipolygon" that is the union of all of them, and find the ST_SYMDIFFERENCE From that multipolygon.

We can go there, but I don't want to get into it if you don't need it.

I came across a similar task once. I had to create overlapping parts of circles around thousands of trees in forest. Maybe the solution is not so straight forward (just take the inspiration), but it did the job:

Not the answer you're looking for? Browse other questions tagged postgis union intersect postgis-2.3 or ask your own question.

1
PostGIS union multiple tables, big dataset, faster approach?
3
Get default values from PostGIS DB in QGIS 2.4 editor
3
List of vector to one raster in PostGIS
2
ArcGIS Union equivalent in PostGIS?
1
Difference between PostGIS ST_Intersects vs '=', QGIS and ArcGIS 'select by location'
1
Why does a LINESTRING change in length after union with a shorter but completely-overlapping LINESTRING?
3
Seeking PostGIS equivalent to GeoPandas union overlay?
4
Symmetrical difference between two layers using PostGIS