Creating subset of TIFF image and generating its NDVI in Python?

How would I create something like a 800 x 600 pixel subset of a TIFF raster image? I want to also take that TIFF and generate an NDVI image for that subset.

NOTE: I am working with a Landsat image. The image has B5 at the end of the file title.

What I've done so far:

This runs fine without error after help from this site.

I want to display this using Spyder or Jupyter notebooks. So I thought to use matplotlib and did the flowing code:

Doing this generates a 800x600 matplotlib window, but it's all purple, not sure why its producing this.

But how do I extract out NIR and red here from this single Landsat image?

My attempt at that:

When I run that code for the bands I get the error:

When I run this code:

So this means that the Landsat image only has one band? But in order to do NDVI don't I need 3 bands?

I am thinking of writing some code like this to get the NDVI from that raster. But not sure how to go about extracting out the bands:

This code doesn't work because bands isn't define as anything so I don't know how to define bands to get the NDVI.

After this I am not sure how to go about both displaying and saving the rendered image.

Here's an example that uses rasterio windowed reading to extract an 800x600 subset of the red and NIR bands from an eight band Landsat 8 image, generating NDVI and ploting it in greyscale. 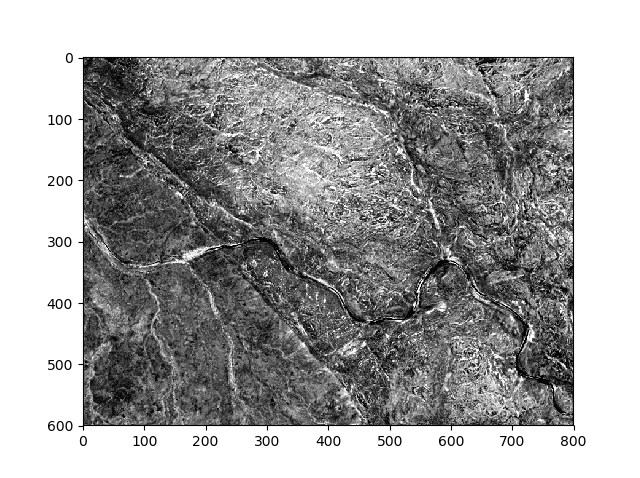 Not the answer you're looking for? Browse other questions tagged python gdal rasterio or ask your own question.

0
Using Rasterio, Matplotlib, and Numpy trying to calculate and plot NDVI of a raster image getting error: IndexError: list index out of range?

2
Subset multiband tiff file using Python in ArcGIS for Desktop?
4
NDVI image processing
0
Using Rasterio, Matplotlib, and Numpy trying to calculate and plot NDVI of a raster image getting error: IndexError: list index out of range?
1
Using rasterio and matplotlib how can I create a window for an NDVI image to fit into?
0
Reading a 4 band image with rasterio (python)
0
Raster Function for NDVI Band Calculation - Divide by Zero
1
Display GeoTIFF single band image in Python