This has kind of been asked before in different ways, but I'm struggling to adapt the answers to my specific scenario.

Here's a picture to try and convey this: 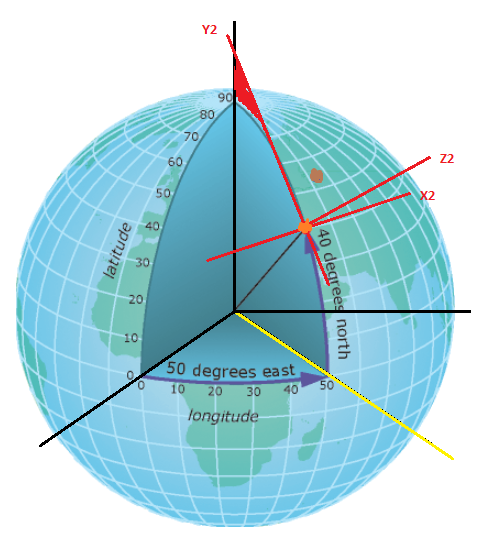 The orange dot is the ground station, the brown dot is the plane, and the red axes are how I'd like to define my new relative grid.

I tried doing this: Convert the lat/lon/alt to earth XYZ coordinates, then rotating about the earth Z axis by ground-station longitude, then rotating about the earth Y axis by ground-station latitude, then translating along earth X axis for ground-station altitude (plug earth radius). I then relabeled the axis: earth-X = Z2, earth-Y = X2, and earth-Z = Y2. I got a result that placed the ground station at (0,0,0), but the plane results don't look right: the altitudes shown on the Z-axis are out of order compared to the plane's GPS altitude readings. I'm testing with plane coordinates that are close enough to the ground station that the curvature of the earth should not affect the Z-axis very much (maybe a couple hundred feet, while these planes are at 5000ft to 48000 ft).

Next, let's compute the followings (from the Ground Station and Plane geodetic coordinates):

(All geodetic coordinates are in radians.)

@rdb is dealing with altitudes (referring to some geoid)...

but turning polar to rectangular like a sphere, so it is not easy to write a correct answer.

Questioner was describing his approach which was unsuccessful. However, his/her description is not to be confused as his/her requirement to arrive at the correct answer.

This is correct. My answer jumped directly into the ECEF coordinates (i.e., gX/gY/gZ and pX/pY/pZ), making the assumption that the Questioner knows how to convert phi/lambda/eh to ECEF XYZ. Moreover, Method 2.2.2 is chosen because it is easier to explain (and much less to type).

Not the answer you're looking for? Browse other questions tagged coordinate-system gps or ask your own question.

5
How do I calculate a xyz-position of one GPS position relative to another?
2
Local ENU point of interest to ECEF

1
Get relative north aligned point 2163 (US Equal Area)
1
Converting unknown type of coordinates to lat/lon
3
Why does the earth drop off faster than expected over a geodesic when converting from lat/lon to cartesian coordinates?
2
Local ENU point of interest to ECEF
3
Converting the local coordinates to GPS (lat, long)
1
Options for precise relative position calculations