Struggling to use Field Calculator - PyQGIS

I'm using QGIS 3.4 (Madeira) and I am struggling to use python to calculate attributes of a new field in the attribute table.

I have already joined a csv and a shapefile. I use the code below to create a new column in the attribute table called 'PatCNT' with type as 'Int'

Now, I have another column in my attribute table called Patient_Data_PatientCount (which is what I joined from the csv file). I want to copy that column as an integer. When imported from a csv, it's type is 'String'

I've made some attempts based on other Stack Overflow threads like:

-Is it possible to programmatically add calculated fields?

-How to use QGIS field calculator in python?

-Cannot calculate new values for an empty attribute using existing attributes in QGIS with python However these are all for QGIS 2.18 and there are some differences (pendingFields doesn't exist anymore)

If you want to add an integer field, you should replace:

If your field from the csv is already joined to your shapefile, you could try using:

I'm adding another answer as I was struggling to do anything but copy @Joseph code (which does exactly what I asked for). But I wanted to expound a little bit on how to write an expression using the "field calculator", in python.

The key here is this line:

The setAttribute() function takes two arguments. The first argument is the column which I'll be writing to ('PatCNT'), the second is the expression you want to evaluate. If I were to use the GUI field calculator to do so it would look like this: 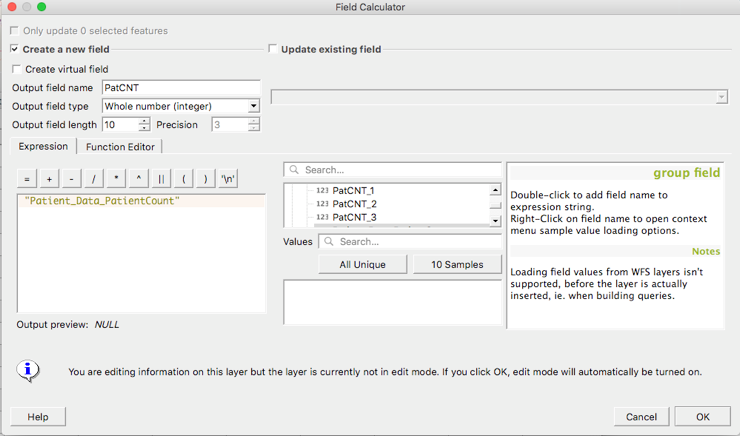 So the second argument in setAttribute() is the expression. In this case, I am just recreating the 'Patient_Data_PatientCount' field. I'm doing this because I previously converted the field type from a string to an integer.

Anyway, this is a pretty plain expression, but I could do more exciting things. For example, if I want to add 10 to the 'Patient_Data_PatientCount' field, my expression would be:

Also, just like in the GUI field calculator, I can use the values in other fields to write my expression. Another example:

This is really nonsense in my context, but you can use it as an example. I have another field in the attribute table called 'AWATER10'. This is the amount of water area in each zip code. My expression here multiplies 'Patient_Data_PatientCount' by 'AWATER' for each zip code.

One last note, you must include the 'feature' part of that expression because remember, you are iterating over each feature in the layer. In this case each feature is a zip code.

Not the answer you're looking for? Browse other questions tagged qgis pyqgis pyqgis-3 qgis-3 or ask your own question.

11
How to use QGIS field calculator in python?
6
Is it possible to programmatically add calculated fields?
3
Using PyQGIS to create a new field instead of using the Field Calculator
0
Cannot calculate new values for an empty attribute using existing attributes in QGIS with python

3
Field calculator uses wrong fields when working with joined data
3
AttributeError: 'NoneType' object has no attribute 'dataProvider'
3
How to save color VALUE to attribute table in QGIS for a vector layer with a graduated symbol renderer
2
Adding attribute values from CSV to multiple shapefiles in PyQGIS
1
PyQgis v3 addAttribute
2
PyQGIS import csv- QGIS 3.4
1
Rename fields of shapefile using PyQGIS 3
6
Loading CSV with X&Y and Save as Shapefile using PyQGIS?
3
Using PyQGIS to create a new field instead of using the Field Calculator
0
Adding values into new fields with PyQGIS