Georeference a raster, CRS unknown but latitude and longitude grid is there

So, the situation involves :

EDIT : Here's a screen capture of the menu prompted when adding the raster. It's in french, but in the first field, it translates to "select the CSR for the raster layer" 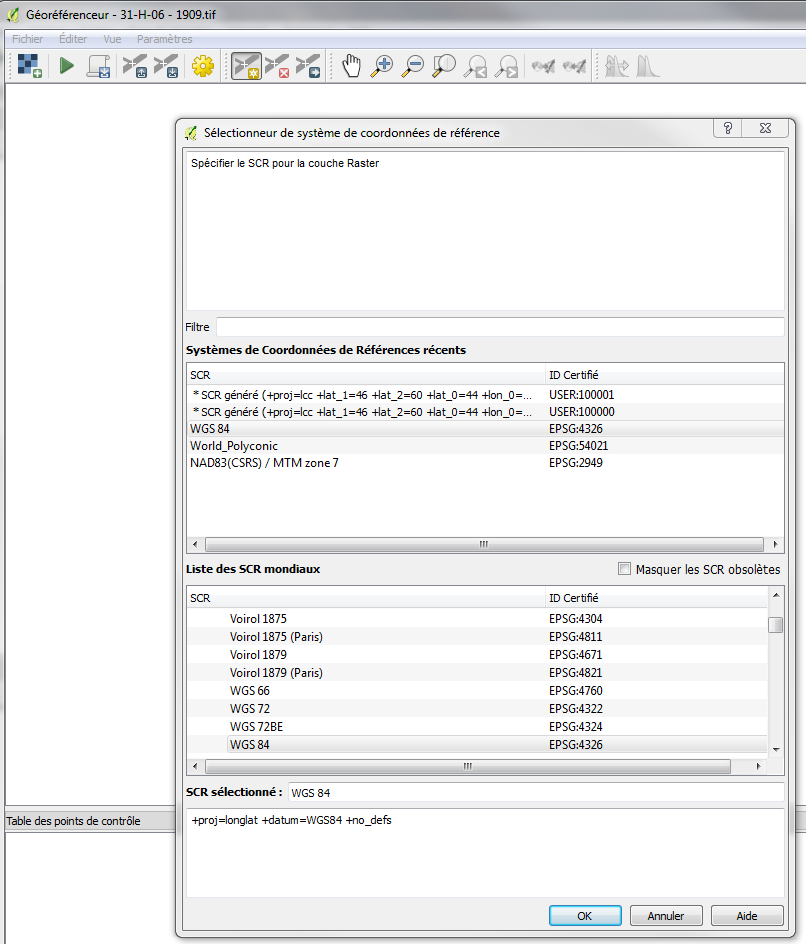 Now, the questions are :

If you load a new raster (at least in QGIS 2.18), you may get prompted for a CRS. I never understood why. It might be a global setting for adding new layers, but it has no effect at this stage.

In the settings of the georeferencer (the yellow gear-wheel icon), you have to specify the target CRS, and an output filename. If you want to enter degrees, I suggest to take NAD27, not WGS84 or NAD83. Keep in mind it is an old map!

You can not run the Georeferencer without specifying any CRS, because the output Geotif needs one. Remember that latlon degree CRS are also valid CRS!

In fact, you have a whole bunch of geographical CRS, all using latlon degrees, but on different ellipsoids, and some with a center meridian different from Greenwich.

Since the map is older than NAD27, you can not be sure what datum is actually used. So you might be better off by georeferencing against recognizable points (like street or railway crossings) compared to a current basemap like Openstreetmap or Google imagery via the QMS plugin. In that case, I suggest to set project and georeferencer CRS to EPSG:3857.

Not the answer you're looking for? Browse other questions tagged qgis georeferencing or ask your own question.

3
What is the closest CRS to “Meridiano de Greenwich”
3
Adding points defined by Latitude and Longitude to map using QGIS?
2
Importing raster data with known lat/lon to QGIS?
5
Georeferencing old map in QGIS?
2
Producing offset after georeferencing Soviet topographical military maps from printed control point coordinates in QGIS
1
Looking for a projection used for Nova Scotia in 1924
1
Why is QGIS not recognising latitude and longitude correctly?