Creating buffers around locations when using a Geographic Coordinate System

I am trying to make students familiarize with some some basic GIS procedures (using QGIS 2.18), like creating simple maps featuring points that represent the location of shops in a given area. I am making them use OSM as base map, which (if I am not mistaken) uses a Geographic Coordinate System (wgs1984).

I anticipate a problem when it will come to create buffers around those locations. The problem I envisage is related to the coordinate system used by the base map against which the point shapefile has been created.

How to meaningfully create buffers when using a GCS? Is there a way to reproject the basemap to a projected coordinate system so that buffers will meaningfully employ metric units?

Once you bring in your basemap (I use the QuickMapServices plugin) you can reproject the project to a projected coordinate system using the button on the bottom right of QGIS: 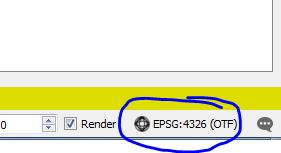 Reproject it into a suitable CRS and then if you create new layers make them the same CRS as the project. Then you can do any geoprocessing using metres instead of degrees.

Not the answer you're looking for? Browse other questions tagged qgis coordinate-system openstreetmap buffer basemap or ask your own question.