Where to find Windows osm2psql binaries in 2018?

I've read all the stuff in their git, here at stackexchange, in OSM wiki, but all links are broken and the latest windows binary I found is HOTOSM bundle built at 2010.

It seems so strange for me, I even thought that people use another software to load OSM data to PostgreSQL for to use as GeoServer datasource. But OSM wiki mainly mention this program.

I surely do not know what to do now, I need the Windows distribution of it OR another simple way to load and show OSM data via GeoServer pgsql datasource.

Where can I find Windows osm2psql binaries in 2018?

Unoffical builds for Windows are available from AppVeyor but you need to find the right build artifacts.

However, the the links in the README to builds of the latest release 0.96.0 are broken as the artifacts are no longer available:

To find a build: 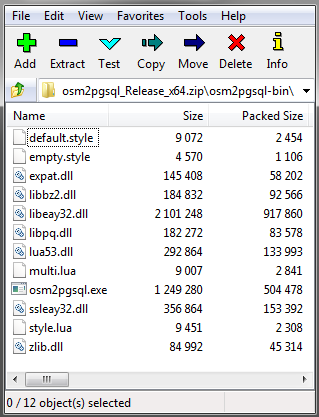 Not the answer you're looking for? Browse other questions tagged openstreetmap osm2pgsql or ask your own question.