Removing a 'non-gap' gap from a polygon that straddles +/- 180 longitude; looking for an R-based, code solution

I am working with a set of polygons from here: http://lme.edc.uri.edu/index.php/digital-data. In the artic, there are several polygons that straddle the +/- 180 longitude line.

These are single polygons (only one entry in attribute table), yet they have overlapping edges along this boundary. (i.e., if I look at a 1:1 scale, there is no gap; I assume there are repeated vertices). These internal gaps in the polygons are causing some issues with reprojection (e.g., to Mollweide, where the polygons wrap across the globe) and area calculations, and I don't think moving the center of the map around will help. 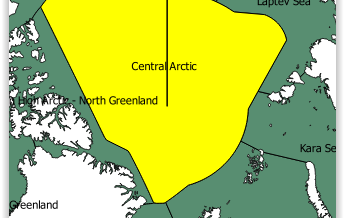 I may have missed a good solution, but most people are solving slightly different: a) overlapping different polygons that they need to snap together, or b) a 'true' gap/slice out of a polygon that they want to mend.

My goal is the following: 1) identify polygons that have this kind of internal 'non-gap' 2) remove the 'non-gaps' from the polygons, creating a single set of non-overlapping vertices

I would like to know if there is a way to achieve this in R. I have enough facility with R to import of shapefiles, change projections, and make area calculations, but I have cobbled this together from R documentation and stackexchange. I do not need you to write the code out for me (though I would not object), but I am hoping you can point to a plausible approach, perhaps with some psuedocode or at least identification of useful tools/packages.

1
How to avoid snapping errors in QGis?
4
How to align edges of overlapping polygons in the middle line?
2
Fill slivers using R or SAGA GIS
1
Identifying gaps within polygons, and excluding islands in ArcMap
8
Shapely polygon union results in strange artifacts of tiny, non-overlapping areas
4
Filling gaps between polygons using QGIS
4
Simplifying adjacent polygons on subset of vertices only