After calling projectRaster in R, missing right edge of world map when plotting with ggplot

I'm using projectRaster and rasterToPoints in R to get a dataframe with lat/lon coordinates for plotting in ggplot but I seem to be losing the right edge of the map (New Zealand). I'm not sure if this is an issue with my use of projectRaster or rasterToPoints or geom_raster

And here's my code to to project and convert to a dataframe: 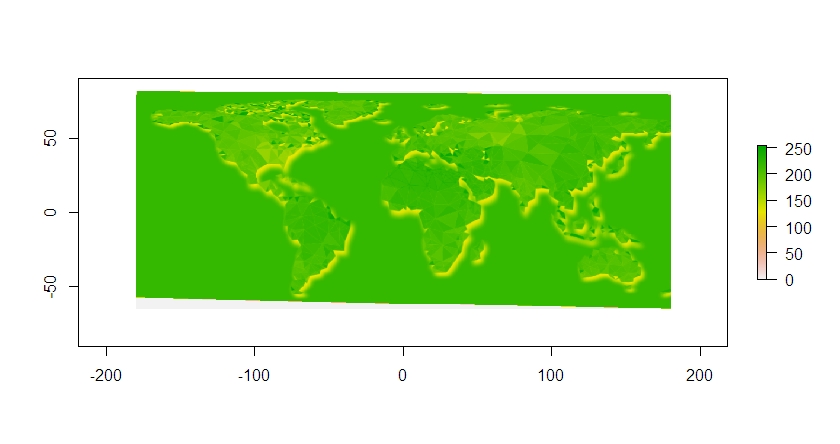 Your source raster isn't from -180 to +180 in its coordinate system - it goes beyond +180 and this is being chopped when you transform it. To see:

Create a point at almost +180E on the equator:

Now transform to the coordinate system of your raster to see where it would be:

But your raster extent has an x-coordinate max of:

which is a lot bigger than the X coord of the transformed point. So the right hand portion of your raster is beyond +180E. When transforming the coordinates this actually gets wrapped round to the western hemisphere, and will overlap with the portion of raster on the left of your image, because the left edge of your raster is at 180W, or near enough:

So there's something fundamentally wrong with your source raster, and you should check carefully you've got the CRS correct or that the data hasn't been manipulated or shifted or otherwise mashed up, or that its extent hasn't been set wrongly.

Not the answer you're looking for? Browse other questions tagged r or ask your own question.

11
Processing vector to raster faster with R
4
Problem points into a shape polygon
7
Access to attribute in rasterlayer in R
1
Opening rotated raster in R
1
Using spatial points to extract values from large raster in R
0
Linking attribute table with a tif in R
2
How to extract min / max values from a raster and store them in new objects in R?