How to create a 50x50 m hexagonal grid with mmqgis?

I'm trying to use the mmqgis plugin to create a hexagonal grid, and I am really perplexed on how to fill in the variables required. I would like to have hexagons around 50m x 50m in size (real life), and my project is in long/lat. I hope that someone can help. Thanks

Not tested, but you could use a projected CRS to make your grid and then deproject the resulting shapefile to lat/lon geographic. This will distort the hexagons though.

The attached picture shows such a grid, on a projected map image that is badly-distorted as a consequence of being reprojected on the fly to EPSG:4326.

But I would not trust such a grid as far as I could throw it. For what it's worth, my suggestion would be that if possible you change your project CRS to a projected one and use the mmqgis plug-in to make your hexagon grid using units of distance. 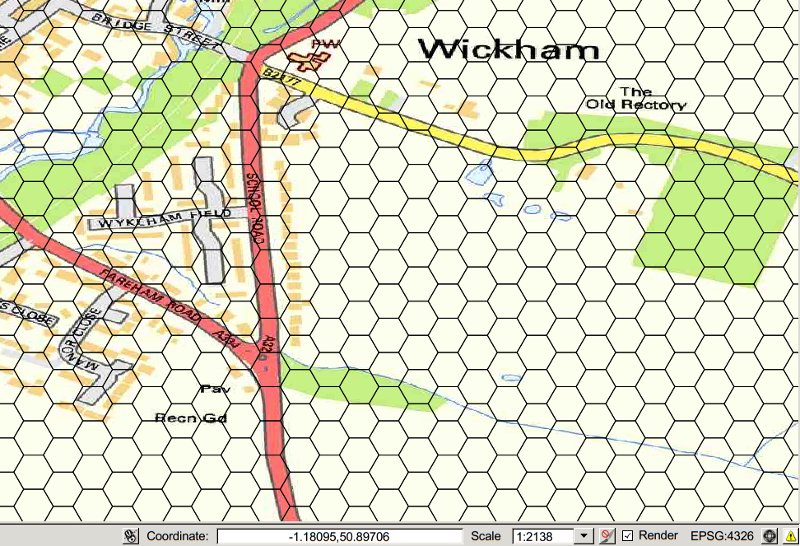 Not the answer you're looking for? Browse other questions tagged qgis hexagonal-grid or ask your own question.

7
How do I set mmqgis create grid options?

7
How do I specify a CRS for a fictional game map in QGIS?
7
How do I set mmqgis create grid options?
5
QGIS: CSV point grid to polygon - not raster
4
How to convert polygon into hexagonal grid?
11
Creating geodesic hexagonal global grid in QGIS?
3
Failing to create a grid with hexagonal units
3
Using project / layer CRS in QGIS?
1
GeoServer hexagonal grid?