I have a table with start and end point data in each row and need to convert them into lines, but I would like something other than a straight segment.
Ideally, I want to connect the points via a segment that is determined by the bathymetry of the area (so along the same bathymetry as the start and end points). I have both raster bathymetry layers and contour shapefiles.
The only way I can think to do this is create a raster layer with the difference in bathymetry from the mean bathymetry of start and end points and create a least-cost path with large differences being very costly.
I wanted to float the idea out there though to see if there are any automated or different ways to do this. Here is a diagram of what I have/want: 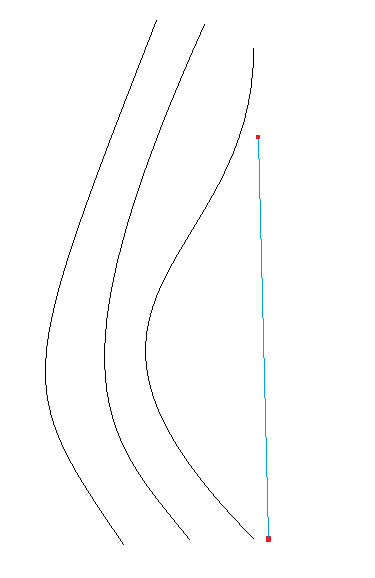 After exploring the idea, it is not feasible to simply snap the points to the bathymetry contour shapefile and split the lines, that would change the location of the points too much.

I ended up doing this as described in the question. Here were the rough steps performed in a python scripted loop for each set of points:
- record the bathymetry values for the start and end points
- calculate an average of the two values
- use raster calculator to create a bathymetry differences raster with the difference in true bathymetry from the averaged bathymetry
- perform least cost path analysis using the raster created above as a cost raster
- merge path into single feature and snap the ends (previously centered in the raster cells) to the start and end points
- merge all the features into one shapefile

And for the occasional set of points that were contained within a single bathymetry cell I just used a straight line segment.

Not the answer you're looking for? Browse other questions tagged arcgis-10.0 line cost-path or ask your own question.