How to re-use an expression, stored as a string, in QGIS Field Calculator

So I needed a way to store expressions for re-use in the Field Calculator at a much later time.

The method I figured out is to store the expression as in a text field. When I need to re-use the expression, I copy it from the attribute table into the Field Calculator. Here's what that looks like with a simple example:

Of course it's trivial to remember and re-enter the expression in this example. I would use this method with much more complicated expressions, such as "Population"/$area*3.58701e-8/"Population", which calculates population density (people per square mile) after first converting square feet to square miles.

Now I'm looking for a better way than manually copying the expression. It seems like there should be a way in the Field Calculator to take the field name as input, interpret it as an expression, and output the result of that expression. Here's what I've tried so far:

Just using the field name outputs the formula as a string. 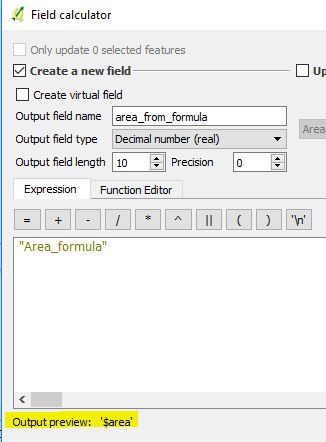 Is there a function that will force the Field Calculator to interpret a string as an expression? By comparison to the expressions to_real() and as_string(), I'm thinking it would be something like as_expression() or as_formula(). So the output of as_expression('$area') would be the calculated area of the polygon feature.

I found the answer to my own question almost as soon as I posted it. The function I was looking for is called eval.

Evaluates an expression which is passed in a string. Useful to expand dynamic parameters passed as context variables or fields.

So for my example where an expression is stored as a string in a field called "Expression", use this in the Field Calculator:

Not the answer you're looking for? Browse other questions tagged qgis field-calculator function or ask your own question.