Shapely : cascaded_union seems to return too many polygons

I'm trying to get the union of around 4,000 polygons using Shapely's cascaded_union function. The output of this function is a multipolygon in my case, which is normal since many input polygons do not overlap.

Yet, when I draw the output, I can clearly see that some small polygons are included whereas these polygons belong to a larger polygon. To my mind, these small polygons should be excluded from the union.

Here is a sample screenshot with 3 polygons of the union returned by shapely. The blue one is the bigger one with 43 185 exterior points and the green and orange ones are the smaller ones. 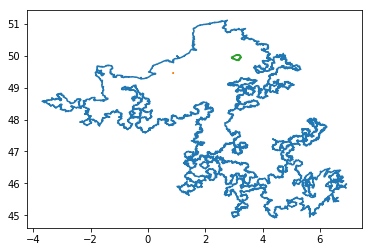 I also uploaded a text file containing the coordinates of the 3 Polygons using the built-in function mapping() from the shapely.geometry module.

It can be accessed there.

The file contains a dictionary {index:{...}} with 3 indexes, each of them containing a dictionnary representing a Polygon. If you need to get back the coordinates from the file, you can use the following Python code:

If you have any clue of why these polygons are returned by the cascaded_union function, I would be happy to get them :).

Browse other questions tagged polygon shapely union python-3 or ask your own question.

6
Eliminating gaps in ArcGIS union operation?
4
How to reassign small polygons to its nearest neighbor in R (similar to gdal_sieve.py function)?
3
How to return WKT of entire polygon with shapely?
4
Group and union polygons that share a border in R
1
How to normalize the data mapped on a shapefile in GeoPandas when polygons do not have the same size
3
How to self union a GeoDataFrame?
2
Creating Shapely Polygons with holes
1
Calculating the area of the polygon segments within multiple overlapping buffers