The graph layer holds 177350 line features which are representing a streetmap. Loaded into QGIS it looks like this: 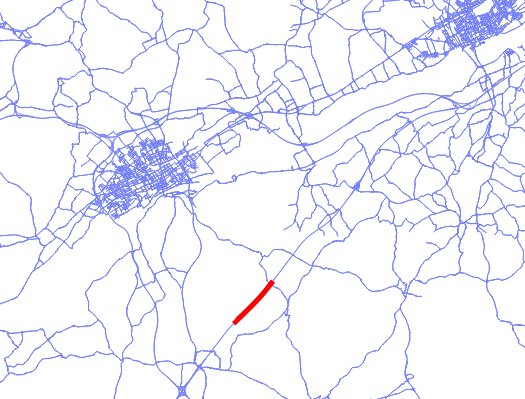 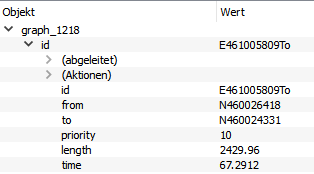 The nodes layer holds 87667 point features which are representing the start- or endnodes of the streets in the graph-layer. Loaded into QGIS and overlayed with the graph-layer it looks like this:

Every node in the point-layer has a unique nodeid, x-, y- coordinates and a type (the type attribute is not relevant): 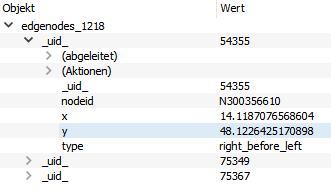 What I want to do is to calculate the azimuth for every street (line) in the graph layer. The outputlayer of my python script should look exactly like the graph-layer, just with an additional azimuth attribute. Like this: 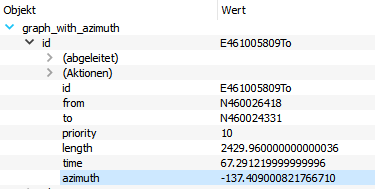 To achieve this, I have written an python script which loops through all the features of the graph layer. For every street, I look up the x-,y-coordinates of the startnode, and of the endnode. I will need the x-,y-coordinates for calculate the azimuth later on in the script. I am doing this using QgsFeatureRequest. But as there are 177350 lines to go through, I will have to request 177350 * 2 times (177350 times for startnodes and 177350 times for endnodes). And it just takes too long.

I have already tried to set the "NoGeometry"-Flag and the setSubsetOfAttributes-method as it was suggested here. But it seems to be useless. What am I doing wrong here? How can I speed up the process of searching for the nodeids in the nodes-layer?

If you need some more information on my question, please feel free to leave a comment down below!

A few different ways to do this but if your lines are drawn in the same order as the points you can do this which avoids most of the API and just uses expressions:

Not the answer you're looking for? Browse other questions tagged python pyqgis performance expression qgsfeaturerequest or ask your own question.

11
Displaying azimuth of line in QGIS?