I am facing some problems when digitizng polygons of uneven (irregular) sides using advanced digitizing and none/planimetric measurements for area and length calculations.

In the example image below the blue lines were created using advanced digitizing with locked distance (5 lines measuring 20.00 meters and one line 19.90 meters) and using perpendicular and parellel relative angles, the red ones were created also using advanced digitizing but they were the result of the intersection of two circles (20.00 meters, and 20.10 meters) using 'add circle by a center point and another point', both circles made at the end of the corresponding lines snapping on vertex, the green line was created snapping on vertex at the end of both lines. The length and area displayed is calculated by QGIS.

The workflow I just described is similar to what I do in AutoCAD, in it I can draw the same lines and polygons and get 400.00, 399.98, 400.00 square meters for P-1, P-2, P-3 respectively. I do not want to go back to AutoCAD because the print layout for QGIS is far superior to the one in AutoCAD (using atlas).

My problem is mostly with digitizing the lines using circles, the red lines should be of the proper length (20.10 meters and 20.00), so that way I can digitize P-1 again using parallel and perpendicular relative angles and get a proper value of 400.00 sqare meters.

The measurements for the polygons are taken from property deeds and titles (cadastre archive of local goverment), and the polygons are used to print parcel data that is given to the owner, so I cannot change the area of polygons that have even sides described in the property deeds, I could simply enter manual data for such polygons but I want to avoid that because I consider it malpractice. And this is why I do not want to go back to AutoCAD, as the printed document from AutoCAD requires manual entry of data (owner name, parcel code, zip code, etc.) and is prone to typing errors, the data is already available in a database that I can use for the polygons.

I also want to avoid having to import dxf data.

So my real question would be, what is the proper or better way of digitizing polygons of uneven sides using known segment lenghts? 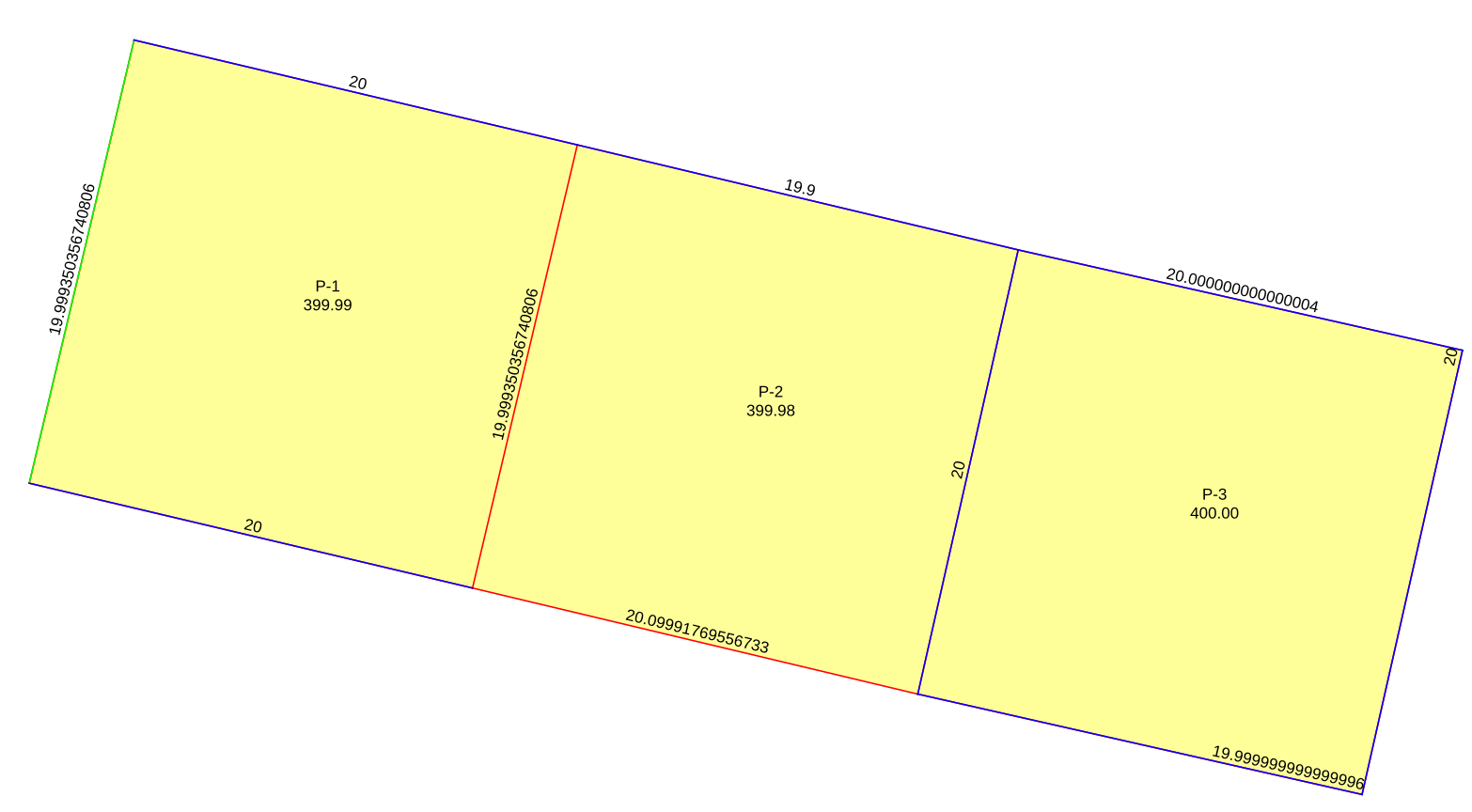 I can not trust (yet) in the Advanced Digitizing panel as a CAD tool.

I take all possible precautions, drawing near the origin of coordinates of my custom CRS, all measures setted to planimetric, same CRS for the project and the layer, also without reprojecting on-the-fly (without project CRS), and when I want to draw a line of 20 meters perpendicular to another, it is labeled, i.e. 20.0000000000145 meters. The difference varies according to the angles I use, also varies if I am not near the origin of coordinates, wich makes me doubt about the planimetric concept.

In the update of this answer: Deleting all lines not perpendicular to another line layer using QGIS?, I found that I could not select two perpendicular lines when they were digitized as perpendicular with the Advanced Digitizing panel, until I round the azimuths by 5 decimal places.

About the circles, must be digitized in a compatible with curves data provider. Temporary scratch layer accepts compound curves, so it is a good option. But then the snap tool does not find the intersection. Your method of the Lines intersections tool seems to me a good approach.

When the snap tool finds the intersection within two curves, they are not such thing.

So, the answer is:

If you are fine with the tolerances of the Advanced Digitizing tool for the angles, distances, and/or coordinates, just draw the circles in a temporary scratch layer, find the Line intersections and snap to that points.

Not the answer you're looking for? Browse other questions tagged qgis digitizing or ask your own question.

4
Deleting all lines not perpendicular to another line layer using QGIS?