I'm trying to export a PDF of a map of northern Europe.

The resulting PDF file is missing the British Isles and smaller islands. This does not occur if I use a lesser detail shp (https://www.naturalearthdata.com/downloads/50m-physical-vectors/). I have also tried reducing the DPI settings (although that shouldn't matter for a vector) to no avail.

There's a lot of useful information in the comments, which I summarize here so it doesn't get buried. Credit to @Mapperz and @Juan.

Adobe products have a limit of 32,768 vertices (16 bit limit?). The limit was reached in this situation because of a vector layer with

QGIS doesn't crop the data to the map extent when exporting to pdf, so the vertices outside the map extent still count towards the total number of vertices. I made a feature request.

The current solution is to reduce the number of vertices before exporting. Starting with the layer with the most vertices, apply these methods until the output falls below the 32,768 vertex limit.

A workaround would be to export as raster instead of vector. Rasters don't have vertices, so the 32,768 vertex limit doesn't apply. 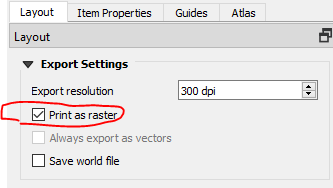 Mapperz seems to be correct. I cropped the original high detail shapefile (method: Cropping Shapefiles in QGIS?) and repeated the procedure described in my question. Everything looks as it should. Cheers!

Not the answer you're looking for? Browse other questions tagged qgis export print-composer pdf or ask your own question.