And then provides an example:

What am I missing such that:

The ECEF coordinates that @whuber provided appear to have been rounded to the nearest 10 meters. Looking at the revisions to the answer reveals that originally, the reference points that he used were (N39°, W75°, 4000m) and (N39°, W76°, 12000m), translating to ECEF coordinates:

The vectors are then:

So they all match except dX which looks like a typo.

After checking @whuber 's answer more carefully, I noticed that there is a slight issue with the methodology. The vector that is used is from the center of the Earth to the reference point, but that vector is not the appropriate "up" direction to base the calculation on. On the ellipsoid, the normal does not pass through the center of the Earth, except for the Equator or the Poles: 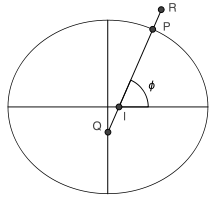 That difference amounts to around 0.2° at most.

To get a slightly better result, you can use the following normal vector components:

Also, you can take a look at this answer on Math that shows an alternative approach for the calculation of the distance and angles.

Not the answer you're looking for? Browse other questions tagged coordinates angles or ask your own question.

9
Calculating View Angle?
3
Calculate field of view / angle of a point to a shapefile
2
Trasformation from ECEF to ENU
9
How to measure angle in QGIS
3
Advanced Digitizing Panel angle units