I have a polyline dataset of transit routes for my city. Around the transit stations, up to hundreds of routes overlap completely, but do not follow the correct path that the busses actually travel (possibly due to gps errors). I am trying to correct this and topologically align these segments to a city road network. the dataset in it's raw form is too inaccurate to automatically align via a tool such as the Integrate tool in ArcGIS Desktop.

Attempts at moving the vertices of multiple features simultaneously in ArcGIS Desktop using map topologies or the align features to shape tool resulted in the creation of multipart features, altered the direction of the lines, and in general, ruined the geometry of the lines. the digitization direction of each route is important for routing applications with the dataset.

In QGIS I could simply select overlapping vertices and move them together. This did not produce multipart features and preserved direction. However, the lines in their raw form do not have enough vertices to accurately be aligned to the road network.

Is there a way I can approach this, such as adding vertices to multiple overlapping polylines at the same time in QGIS?

I cannot fully automate this job, as the raw data is too misaligned from the road network.

You can use the GRASS v.split function and turn on the option to add vertices without actually splitting the line. Here is a screenshot of the tool. 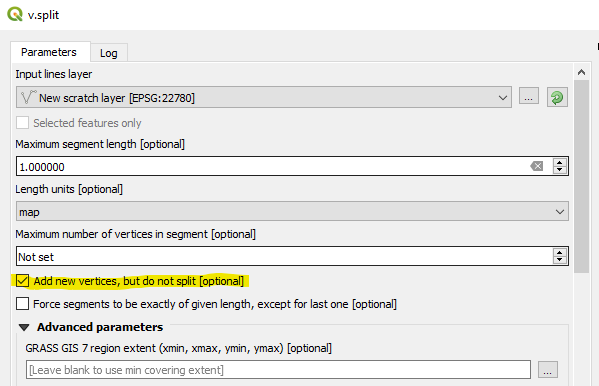 Not the answer you're looking for? Browse other questions tagged qgis topology vertices or ask your own question.

1
How to add more vertexes to a LineString

2
How to solve “features were not reachable” warning message using v.net.distance in GRASS
4
QGIS invalid vertices
4
Sorting line features into route order in attribute table using QGIS?
5
Summing attribute values of overlapping polyline portions in QGIS 3.0.3
6
Merge/join only the lines which are snapped to vertices in QGIS
3
Adding multiple vertices in QGIS