I want to calculate the nearest distance from each coordinate in a vector layer containing more than 17 000 coordinates to another vector layer. I tried the GRASS v.distance tool but it gives the following error: 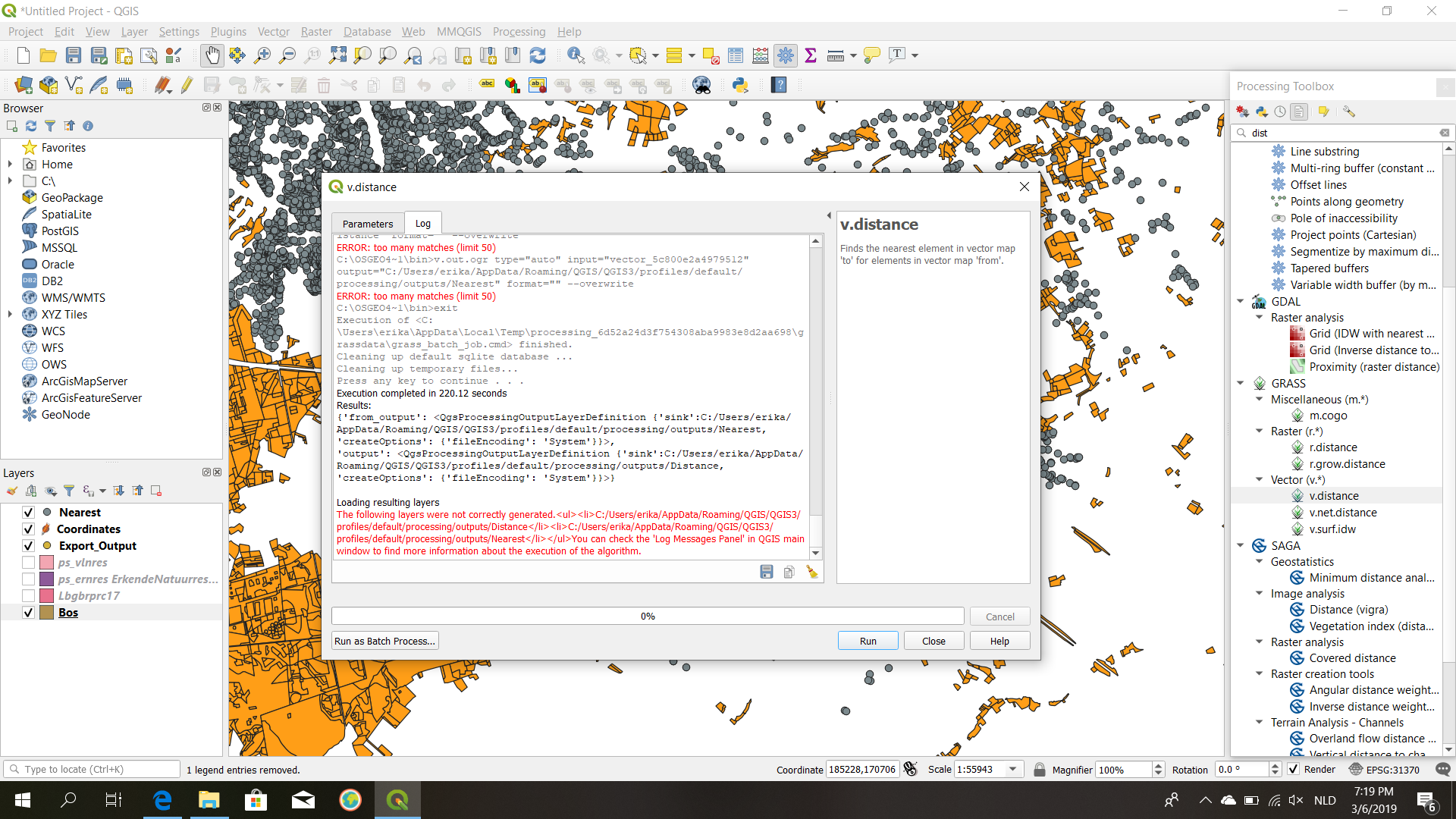 Is there any other method to do this?

Here's the GRASS way to get the distance to nearest feature. Note that the concepts of "from" and "to" are reversed compared to what you mentioned in your question. The "to" vector is what gets the distance value added in its attribute table. Also note carefully the dmax parameter. As Gabriel De Luca mentioned, you have a huge number of comparisons, so choosing a maximum distance is critical.

If you are not interested in knowing which is the polygon id closest to each point, there is undoubtedly a much more simple method: Dissolve them.

Note1: I am always assuming that the geometries of your polygons are valid. This is essential for any operation you want to perform on them. Run the Check Validity tool. Invalid and Error layers must be empty. If not, run the Fix geometries tool against the polygons layer.

Note2: I would prefer to deal with single part polygons, if possible. Run the Multipart to singleparts tool.

Both previous notes apply to my other answer as well.

Now, you can run the Dissolve tool against the Single parts layer. The output is a Dissolved layer with just one multipart feature. The geometry of this feature is very complex. I was dissolved 1500 single part valid geometries without problem. I hope you have no problems with yours.

From now on, all the methods to calculate distances should work just as well. You can try it with the virtual layer approach, or you can try other methods. But the simplest way seems to me to be populate a new field in the points layer, with the expression:

That can be reduced considerably if you can determine a distance threshold from each point within which to perform the calculations. If you can, comment it.

Both layers must have the same CRS assigned. Reproject them if necessary.

We will create a virtual layer. If you see that all works fine, perform the query to the original layer and export the virtual output layer to a file. Work with the saved layer instead of the virtual one.

There are probably simpler methods than this, and there are certainly better ones. From this method we do not pretend any more than to see if it is possible.

Both layers with the same CRS.

You can Create a Virtual Layer with all the point geometries, their ids, the id of their nearest polygon and the distance between them, with the following query:

With that query we are:

Not the answer you're looking for? Browse other questions tagged grass layers vector distance coordinates or ask your own question.

4
Calculate coordinate ( lat / long ) with another coordinate and distance
4
Split vector layer by field name
3
QGIS GRASS maximum distance to a given feature
1
Error in shortest distance between points and lines
1
How to update new column with v.distance from GRASS GIS?
3
Calculating furthest distance from a pipeline line segment to a road line segment in QGIS
2
QGIS 3x automeasure distance for all lines in the layer
0
Calculating distance of a path/vector through multiple points in QGIS 3.16.3