How can I display frequently traveled routes?

I think this has been asked before in a question I am unable to relocate which was about how to display multiple overlapping routes on a map, so that frequently traveled routes (with many overlaps) are bright, and single routes are dim. I believe they were trying to re-create an effect from a map they had found elsewhere, and there was an image of that map included in the question.

The answer used transparency and blending modes to create a beautiful effect, where overlapping lines appeared to glow.

The solution looked something like this, except that the lines followed roads in the basemap. They may also have been categorized with a red-yellow-green color scheme. 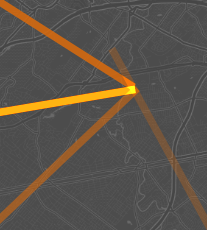 The basemap in the solution (and possibly also in the question) was a dark grayscale map, similar to ESRI Gray (dark) or CartoDB Dark Matter.

The discussion on Creating polyline-based “heatmap” from GPS tracks? has approaches based on GeoTools/GeoServer, Mapbox/TileMill, umap, QGIS, ArcGIS, and other technologies.

Not the answer you're looking for? Browse other questions tagged qgis overlapping-features route or ask your own question.

1
Frequency of partially or fully overlapping lines
4
Is there a way to hillshade vector polygons with a DEM in QGIS?
6
Showing density of overlapping features via transparency in ArcMap?
2
How to get overlapping polylines displayed correctly in Leaflet?
5
Summing attribute values of overlapping polyline portions in QGIS 3.0.3
4
Display lines which share segments by offsetting them only where they overlap?