I have looked at previous threads regarding this topic, but did not find the exact problems described - but they might be related - in short:

Now the problem: My layer with the many points gets only partially cached, even GeoServer renders them completely and serves the client - but it only saves some of the tiles to the cache. I also have the same problem with pre-seeding my layer. It produces the tiles, but not all. 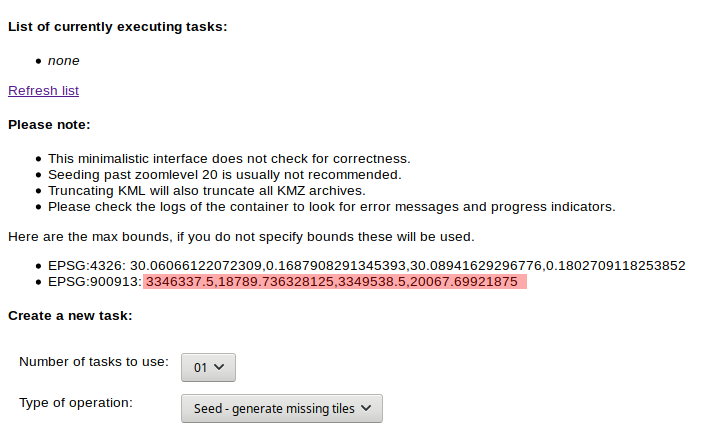 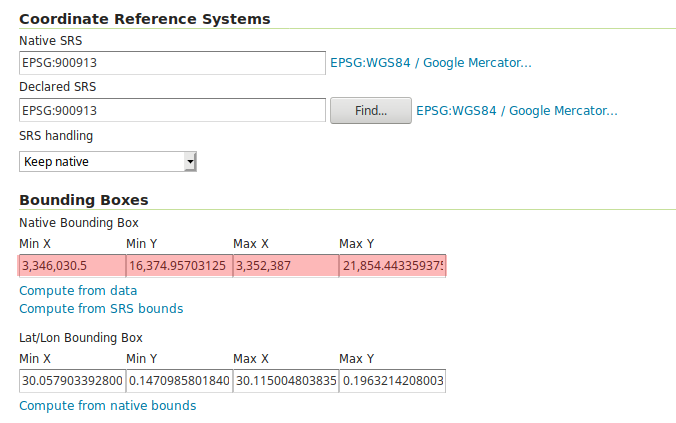 My setup proves to be working. Caching on demand (when a client requests the tiles for the first time) and pre-seeding work. But in both cases GeoWebCache reproducibly does not cache certain tiles. Also when setting a large enough and larger extent for the pre-seeding, I end up with the same number of tiles being cached. The tiles also render fast enough in the client, so I'm sure this has nothing to do with a timeout.

...for the tiles that cannot be cached. I checked now again the layer configuration and noted that the native extent (EPSG:900913/3857) doesn't match in the layer settings and in the GeoWebCache seed dialog. It seems, that the GeoWebCache treats only a smaller extent as valid. Both layer extent values come from the same PostGIS layer. I use an out of the box geoserver running on a docker image.

Is this a misconfiguration by me, or maybe a bug in GeoWebCache?

I deleted the layer and re-added it. Now it seems also GeoWebCache properly detects the real extent and does the caching for he whole of the dataset. A strange problem, that cost me a few hours...and no clue why.

For everyone else with a smiliar problem of partially cached layers. Try to readd the layer and check if GeoWebCache and Geoserver have the same layer extent configured.

Not the answer you're looking for? Browse other questions tagged postgis geoserver wms cache or ask your own question.

5
GeoWebCache WMTS always replacing tiles in cache
1
Can I use GeoWebCache with GeoServer Layers which have different native and declared SRS?
2
GeoServer using GeoWebcache and SQL Server whats the process?
0
Can I create a TMS layer on geoserver or geowebcache
1
How to cache Geowebcache tiles from applications
1
Geoserver GeoWebCache caches tiles of incomplete layers
1
geowebcache-miss-reason:not a tile layer
2
Viewing GeoServer tile layers in QGIS through WMS