I have a shapefile with 50 Polygons. I want to create one PDF file in which I see only one polygon per page. I think I have to use the Atlas function. But I don't know how to Setup the filter.

To control which features are displayed on the current atlas page, use rule-based symbology to make feature visibility depend on the active atlas feature.

Generate an Atlas preview, and flip through the pages of the atlas. The current atlas feature should be the only one displayed on each page.

Notice that this rule-based style applies to the main project map as well. When you disable the atlas preview and/or close the print layout, the most recent atlas feature is still the only one displayed. If you want to see all the features on the main project map: 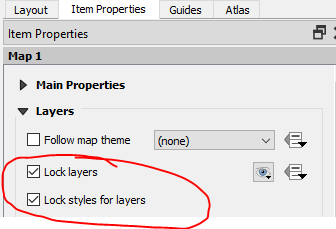 Rather than explaining the process (badly) here are some tutorials, I used the first one but the others look good also:

Best of luck, come back with any specific questions.

Not the answer you're looking for? Browse other questions tagged qgis layouts atlas or ask your own question.

6
How to use QGIS Atlas with multiple layers/files per coverage?
3
Is it possible to have a locked/different first page with QGIS Atlas printing?
2
QGIS Atlas attribute
2
QGIS Atlas page order problem
8
Automatically Show the Page Number of Atlas QGIS
1
QGIS expression to access page-number of atlas for certain features
1
Showing all polygons with same ID with Atlas generation in QGIS
8
Adding page number to an atlas layout with PyQGIS 3