Trying to write a script to merge feature classes based off their name. Steps are as follows -

I'm a novice and my code is very crude, it works for a single feature class but the loop does not accept a list for the 'Keyword' variable. I know I need to somehow iterate over a list but have been stuck how to approach it.

Ideally if I could use the feature class names without the suffix as the 'Keyword' that would be great, but could also just use some raw strings.

I recommend collections.defaultdict when grouping of some kind is involved: 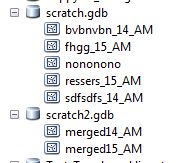 Extending the @BERA's answer, I had to make some changes as I needed to merge based on the class (i.e. "ConservationArea") rather than the suffixes.

I've included a screenshot of the GDB, so you can see why I required startswith and endswith. 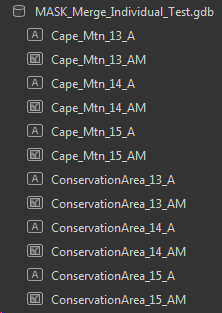 3
How to rename feature classes based on field values within the attribute table?
1
How to match two feature classes with same geography and use part of the name of one to name the other
2
Assigning field value based on location without join
1
How to batch merge point, polygon and line feature classes into a new feature class?
1
Scripting (Python) Feature Class content into Shapefiles following an UTM data structure
1
Using Python to iterate through folders and join like shapefiles, based on name
0
Optimizing combining multiple feature classes into one via arcpy
1
Forcing users to select input from specific geodatabase using ArcPy?