I am trying to write an ArcPy script tool to simplify the spatial join tool for users. In particular, I want to:

3) BUT force the users to choose between two particular feature classes (Districts and Countries) as the join feature class, which are stored in the workspace/folder that I would be sharing with the users.

Is number 3 possible? If so, how? I'm envisaging a dropdown list in the script tool interface, and they choose one of the two feature classes as the input. I have found some help pages that seem to come close to what I need but I can't quite get there. E.g. Limiting feature class parameter to specific geodatabase? - but in this example and others the input for the second parameter is based on the first, which is not the case for me.

My script so far is below. I have added "listFCs = arcpy.ListFeatureClasses()" because I feel like I'll need it but not sure how. I'm assuming I need to either edit "joinFC = arcpy.GetParameterAsText(1)", or change something in the script tool Parameters and/or Validation tabs, but I'm just not sure what.

I'm very new at this.

The way I would do this for a script tool assumes your joining layers never change their datasource names.

So add a parameter and make sure it is of type string, then you can set the Filter, this being a list of user friendly names. This will create a drop down like tool parameter listing the values. 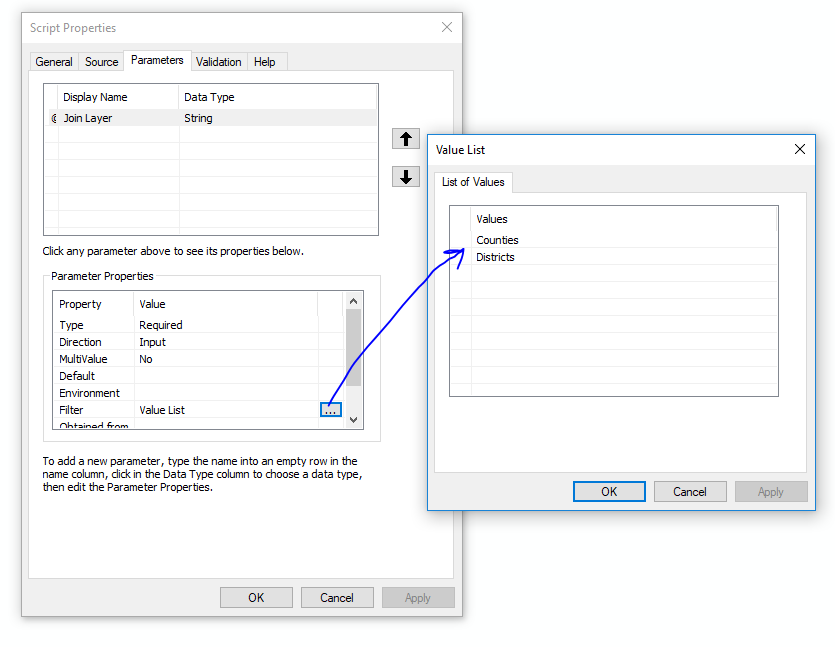 In your code when get the parameter value (joinFC = arcpy.GetParameterAsText(1)) you are getting the text Countries or Districts. At this point it is a simple if-else statement for choosing the actual path to the featureclass that will feed into the spatial join.

it would be joinpath that feeds into the spatial join tool.

Not the answer you're looking for? Browse other questions tagged arcpy arcgis-10.6 or ask your own question.