Creating a combo box in QGIS?

I know the "Value Map" option which allow to create a drop-down list, but how can I create a combo-box in QGis 3 ?

Reminder : a combo-box is

Since you mentioned "value map," which is a type of field edit widget, I assume you want a combo box for data entry in the attribute table or during new feature creation.

In the edit widget descriptions, the term combo box is used according to a different definition than the one you quoted. It's used in the second sense of this definition from Wikipedia:

A combo box is a commonly used graphical user interface widget (or control). Traditionally, it is a combination of a drop-down list or list box and a single-line editable textbox, allowing the user to either type a value directly or select a value from the list. The term "combo box" is sometimes used to mean "drop-down list".

The description for the Value Map widget says it creates a combo box for attribute entry. This widget creates a drop-down list, where you can choose user-friendly values from the list, and different values are stored in the attribute table. There's no editable textbox.

The "Unique Values" widget creates a combo box that satisfies your definition. It gives an editable textbox, with auto-completion in the form of a list that appears when you start typing. The drop-down list is populated with the values already in the field. 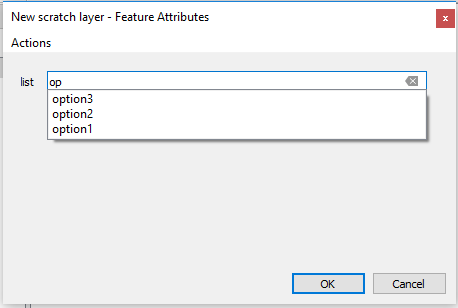 11
How to automatically populate fields instantly?
2
How to save and load vector layer attribute value map, editable state in .qml style file?
1
Adding field values to a QComboBox in PyQGIS
2
Getting values from Qt widgets and using them for a buffer
6
QGIS Plugin - Automatically update field names combo box using data from another combo box
1
Adding combo box to QGIS attributes form
0
Field properties in QGIS are lost when polygon layer shape file is reloaded