for example, the picture above shows the shortest path to AS Calau, which is to be from Stralsund with 353.3 km. However, with only a gap of a node with a distance of 10 km, the shortest path changes as follow:

From Calau to Bronkow is only 10 km and my network is proven to be all connected (len(list(nx.connected_components)) = 1 ). In Figure 2, it can be seen that the shortest path is no longer from Stralsund but from Rostock Oberseehafen, and the shortest distance is then 641 km. Further analysis also shown that from Stralsund to Bronkow needs to undergo similar path with figure 2, thus resulting in a longer distance.

Does anybody know what I might be doing wrong in this case or does anyone have any explanation for this?

Based upon what @FelixIP said I would check the junctions marked here: 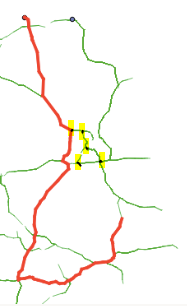 See if they are genuinely snapped or its not a multi-part shape which breaks network topology.

Not the answer you're looking for? Browse other questions tagged shortest-path networkx or ask your own question.