I am trying to generated a dissolved buffer of a large point dataset (Ideally 29 million points - Address data in Great-Britain, but I receive the data by chunks of 1 million points, so these could be used instead).

After trying (and obviously failing!) different methods using ArcGIS, I came across this article: http://blog.cleverelephant.ca/2009/01/must-faster-unions-in-postgis-14.html

Since I have been willing to try postgis for a while a gave this a go. Obviously being an absolute beginner I struggled a bit to get the whole thing up and running, but I finally managed to import data and buffer it. I am struggling however with the ST_Union call, because of memory issues (I am using postgis 2.0.1 running on pretty old 32bits windows pc with little scope to change that in the near future).

I tried changing the memory settings of postgres, as described in the question below: Queries returning very big datasets in PostGIS

I believe I also created a spatial index properly on my geometry column. As far as I can tell, it didn't help.

I managed to run ST_Union on a 500 000 points subset, which is already pretty big. I think at that point the best for me might be to try using the Declare/Fetch method mentioned in the above question, however being a complete beginner I am having difficulties.

I believe it is in my interest to keep the slices as big as possible (because the ST_Union algorithm is fast and optimised). I think I would therefore just need to find a way to "slice" my ST_Union() queries to output one multipolygon for each 500000 rows. I would then be just one ST_Union on the resulting multipolygons away from the holy grail...

It is also possible that my query is sub-optimal. Or, there might by another great simple solution that I just haven't thought about or found online yet...

Here is a query I am currently using:

Does anybody have any idea on how to fix my issues, or modify that query to add a loop or a cursor?

Many thanks to Paul for his suggestion below. The GeoHash trick worked great as can be seen below (see how the cluster size varies with the population density!) 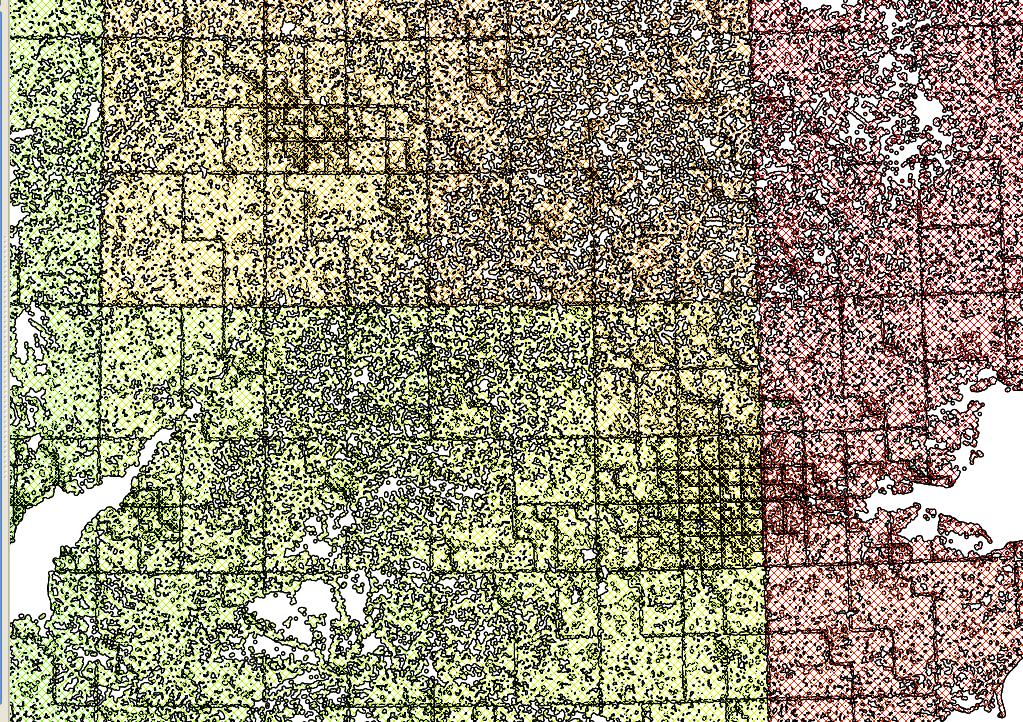 You seem to be trying to union all the shapes without any use of attributes to group, which is odd, but taking that as a given... you want to try and union things that are close together first. So

You might still run out of memory since you're building one ultra huge geometry from millions of inputs. If you do actually have grouping that results in a smaller feature I'm sure things could be finessed.

While it appears to be possible to do it completely in PostGIS easily, in such cases I would likely just whip together a brief batch script to do the OFFSET incrementing. It's a bit trickier on windows, but the general syntax idea is:

For a better hint about invocation and avoiding password prompting, check this question.

Not the answer you're looking for? Browse other questions tagged postgis buffer large-datasets memory union or ask your own question.