I have the following layer using SRID 27700 in postgis: 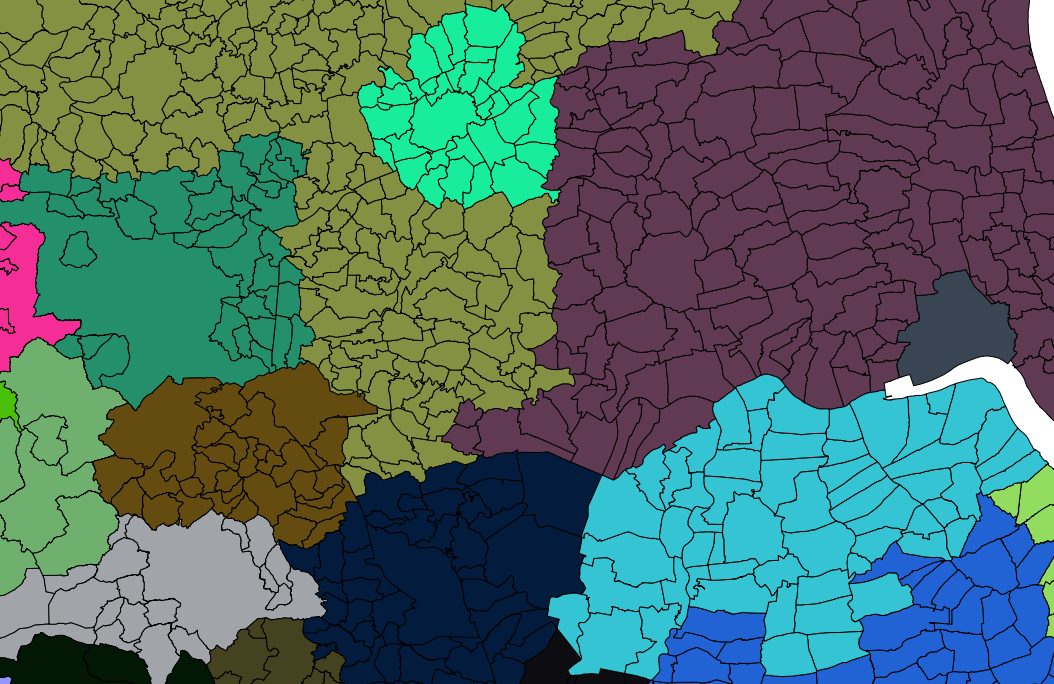 It's every administrative region in the UK, and (as you can see from the colour grouping) each of them has a text field specifying the county they lie in.

What I'd like to do is to make larger county polygons from the smaller ones in a given county, so EG in the picture above all the teal colour polygons would form one large polygon from the single outer ring that contains all the polys in that colour, like wise all purple, brown, pink, grey etc should all form one polygon.

But it keeps generating broken geometries which I then have big problems processing further.

I'm trying to make a simpler county level map with the major output areas in.

Any solutions don't have to be in Postgis either, I have the full OS4Geo stack installed, the latest version of QGis and more utils than I can shake a stick at.

For the record, the dataset I'm trying to create is to accompany a GIS book I'm on writing aimed at .NET programmers wishing to write GIS applications using .NET

After trying the suggestions below, the one that worked the best was 'Paul Ramseys' solution.

I now have a nice simplified counties & boroughs file that's just simple enough for my book, but complex enough to allow me to demonstrate some interesting geo-spatial SQL.

Even though Paul's solution ultimately was the one that worked for me, I also drew on the other answers for things like simplifying the polygon map and reducing the complexity further.

On thing I did observe while doing this however, while ST_Collect is indeed faster than ST_Union, run for run it was also the one mostly responsible for broken geometries. My guess is the speed increase is obtained at the expense of less accuracy in the core function.

ST_Union would work, but your line work is almost assuredly not clean. So the boundaries of your little thingies don't all perfectly like up. You can gently snap them to a grid to try and increase the odds that vertexes line up, but I bet that you'll still have a few cases that don't work. Either they will be beyond tolerance or, more likely, there will be places where the vertices aren't paired, so there's a line on one side and a vertex on the other.

If you have PostGIS 2.0, building a topology structure with a tolerance could get you to the answer you are looking for, if you have some luck.

ST_Collect function is an "aggregate" function in the terminology of PostgreSQL

You say that need to "... form one large polygon from the single outer ring that contains all the polys...". The ST_ExteriorRing do this,

You can use ST_Union(), as suggested, or test with ST_Collection().

NOTES: to avoid little lops or "broken geometries" you can use st_convexhull and/or ST_Simplify for each geom,

and check your geometries,

I'm assuming from your question that you are using Ordnance Survey's Boundary-Line product. If that is the case then it already includes a County level data set so there is no need to attempt to generate it yourself from lower level parish areas.

If you aren't using Boundary-Line then I recommend you do as it is free under the OS OpenData licence and has a County level as a shape file you can load directly into PostGIS.

Not the answer you're looking for? Browse other questions tagged postgis sql dissolve or ask your own question.

2
Merging features in PostgreSQL
8
PostGIS Dissolve/Union close polygons
12
Merge adjacent polygons and return all (adjacent and not adjacent) as Multipolygon?
7
What is the best way to merge lots of small adjacents polygons ? (POSTGIS)
1
Single-ringed GeoJSON polygon in Mongodb