I have 3 separate feature classes: 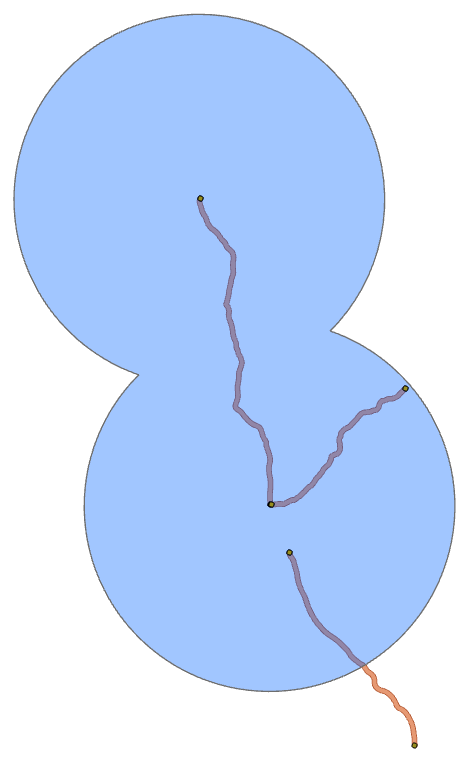 Lines: 3 pcs, do not touch eachother

Points: 6pcs, at the start and end vertex of the lines

Polygons: 1 pcs, derived from joined buffers around the points based on the top line.

I only have the geodata, no additional fields of ID's to connect the features to eachother. I want to create a new feature class with just the two points that are both within the polygon and are based on the top line.

The 2 top lines are separate even though they look linked in this resolution.

I would like the solution to be able to be reproduced in the model builder as I need to iterate this method over many scenarios.

The polygon is one feature, not 2 as I originally stated. They are a union from two previously separated buffers

In your question as you build the buffer from the top line end points, I so no need to do any spatial selection. You may want to build your buffers for other processing but a simple selection by ID will suffice for this question.

Steps 1 and 2 are a one time run of the tools, if you want to loop then have a look at a feature selection iterator in modelbuilder.

4
How to cut unwanted area (polygon) using ArcGIS for Desktop?
0
Iterating and matching feature classes as an input by their names using ModelBuilder?
1
Merge and dissolve overlapping polygons?
4
How to select only the lines that has points at at least one end?
3
Substituting inline variables in ArcGIS ModelBuilder?
1
Counting number of polygons line intersects using ArcGIS Desktop?