I will briefly describe my unsuccessful model shown below. It fails at the very last Project Raster step, where I receive an error mesage.

The model: I have a workspace called South America. It contains a folder for every country in South America (I have the same model for each continent...it works when there is no geographic transformation involved in the projection). Each of the country folders (which I iterate over) has a folder called GL30tiles. This folder contains several rasters. I use the Workspace to Raster tool to merge the rasters into a file called GL30mosaic.tif. I then project the mosaiced raster to the South America Albers Equal Area Conic projection.

The GL30Mosaic.tif is in a UTM_WGS_1984 projection. The built-in ArcMap South America Albers Equal Area Conic Projection is in the South American Datum 1969 (SAD_1969). There is a geographic transformation involved in projecting GL30Mosaic.tif(2) to GL30Mosaic_Project.tif.

When I try running the model, I receive the following error message when it gets to the Project Raster step:

The Project Raster dialogue box when I run the model looks like this: 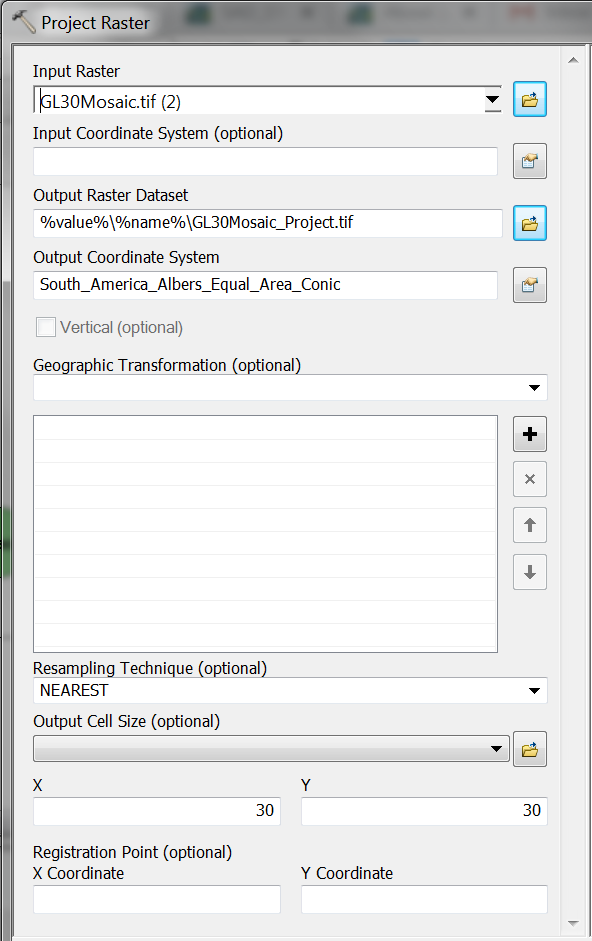 If I simply take the GL30Mosaic.tif and project it in South America Albers Equal Area Conic as a stand-alone operation in ArcMap, there is no problem. When I specify the input raster, the input coordinate system automatically updates. I then specify the Output Coordinate System. When I do that, the Geographic Transformation box automatically updates to SAD_1969_To_WGS_1984_14. 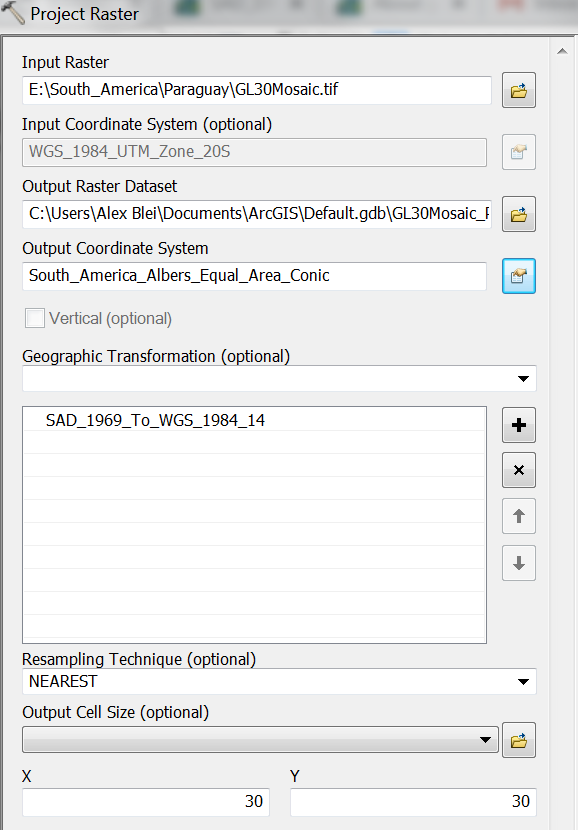 It would seem that the automatic coordinate system updating and geographic transformation selection that occurs when I run the project raster as stand-alone does not occur when running in modelbuilder.

I could do the raster projections in question one-by-one, but it's going to be long and painful. I would like for it to work in Modelbuilder so that I can press run, go to sleep, and come back in 10 hours, but have been unsuccessful in troubleshooting this error.

So the crux of the issue here seems to be that Modelbuilder is failing on the Geographic Transformation issue that does not appear when projecting the rasters one-by-one. How to overcome this?

EDIT: I am including the revised model which passes the geographic transformation as a string into the project raster tool. It doesn't completely solve my problem (see my comment in the comment section), but at least the model runs and creates output.

Inserting a string variable into the model with the appropriate geographic transformation and feeding it into the Project Raster tool did the trick. This would seem like a very straightforward thing to do but getting this to work was an incredibly finicky process. Lots of error messages, unconnecting and reconnecting tools, reselecting, validating the model, etc... then finally it worked.

Hornbydd and mkennedy should be credited with solving this question, Hornbydd for the string variable idea and mkennedy for the pdf with the names of geographic transformations.

Not the answer you're looking for? Browse other questions tagged arcgis-desktop raster coordinate-system modelbuilder iterator or ask your own question.