Is there any way to reproject multiple layers in QGIS?

I'd like to be able to consolidate not only the layers of a QGIS project (using QConsolidate) but also the projections used by each layer. On-the-fly projection reduces performance in QGIS, and this is particularly problematic when working on a slow platform such as an Android tablet; ideally I'd like to be able to quickly recreate a project with all its layers in a single CRS and turn off on-the-fly projection.

Is there a plugin that could take a selected set of vector or raster layers and reproject them, renaming appropriately? Is this perhaps something that could be done directly from the Python console, iterating over selected layers?

You could save the above to a text file called (say) ogr_transform.sh and run it with the command "sh ogr_transform.sh". The EPSG codes for source and target CRSs would need editing to meet your needs. In the "$f-32630.shp" statement the "-32630" specifies the text that will be added to the original file name when renaming, you'll probably want to change this too.

The script assumes that all of the files to be transformed have a single CRS. It is possible that dropping the source CRS definition (-s_srs "EPSG:27700") might make ogr read the CRSs of the input shapefiles from their *.prj files, so it might be possible to use the script to transform input shapefiles having differing CRSs to a new CRS. Please note that I have not tested this.

An afterthought: The shell script doesn't have to be run from a terminal. If in the file manager you right-click on the *.sh file and go "Properties" then click the "Permissions" tab you can enable "Allow this file to run as a program". Doing this will allow the script to be run by double-clicking on it in the file manager. Just for your 'regular' users :) 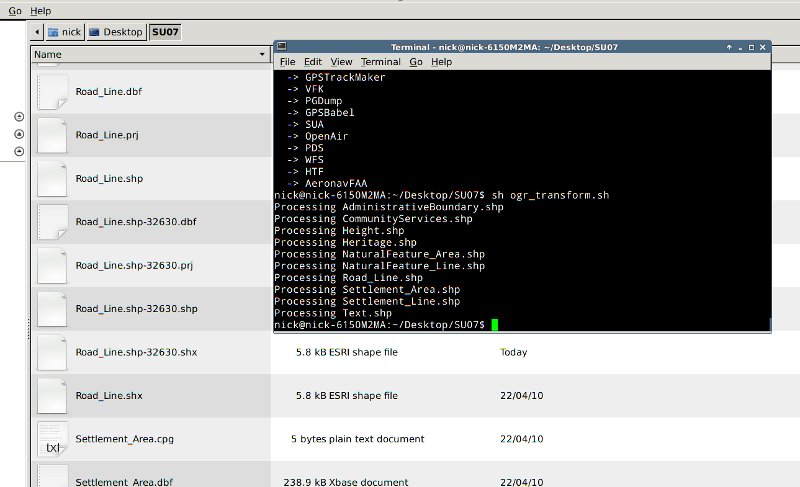 For rasters use the "warp" tool in the raster menu, it works also in batch mode. For vectors just use the "save as..." Dialog.

I wouldnt worry about creating a plugin for this task - I agree with Andree.

This is a good time to get familiar with OGR - specifically ogr2ogr. You can re-project, rename, migrate and a whole lot more with a simple command line.

9
QGIS - export a project with dependencies
3
Reprojecting all layers in GeoPackage
2
Using ogr2ogr to reproject and rename into shapefile?

0
Is there any tool to reproject x,y coordinates, apart from Proj4?
11
A global, grid-like projection for creating heatmaps
2
Wrong Scale after Reprojecting to a Projected Coordinate System
1
SVG's as map layers, any other way?
1
Reprojection doesn't change the coordinates
4
QGIS unable to reproject