Missing features after joining by attribute, but geometry is valid

Points and attribute table for the node_point layer

Points and attribute table for the interpolated_point layer

I used the Join attributes by location tool in the Vector > Data management tools menu and set the node_point as the Target layer and the interpolated_point layer as the Join vector layer. The Geometric predicate is within and Precision is set to 500 m (so that if a point on the interpolated_point layer isn't within another point in the node_point layer, it'll try to get the attributes of the point within 500 meters; that is, that's how I think it works). 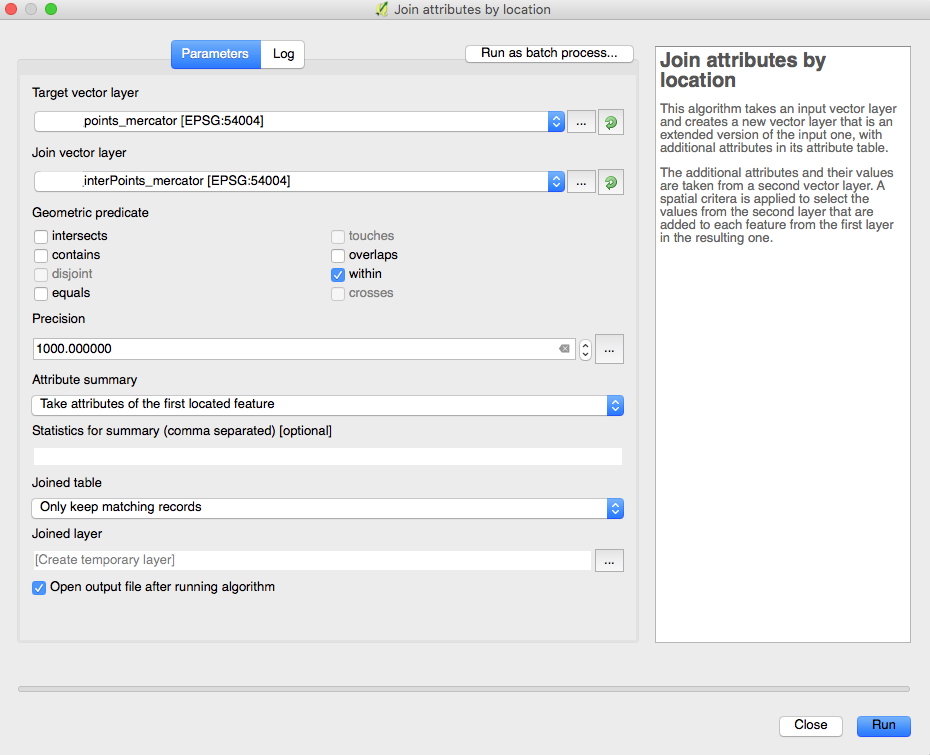 I've tried checking the validity of the node_point layer and all the features node_point layer are all right, so I'm not sure what I'm doing. Reversing the Target and Join vector layer parameters don't change the (undesired) result either. Any thoughts? The expected result is that I have a new layer that has all and only the points from the node_point layer with the attribute tables combined by location.

Thanks for posting edits to help clarify. There are two things wrong here:

Your operation is a fairly standard analysis and the best way that I've found to accomplish what you want (in QGIS) is to use the NNJoin plugin. Why QGIS doesn't have native tool to do this I can't understand. Maybe other readers of this post can elaborate.

Not the answer you're looking for? Browse other questions tagged qgis spatial-join overlapping-features or ask your own question.

1
Joining features based on location and attribute at the same time
1
Joining attribute data from one layer to another layer in QGIS 2.12.2-Lyon
1
Keeping decimals after spatial location joining using QGIS?
2
Empty fields after joining attributes by location to join point to polygon layer
1
Seeking QGIS equivalent tool/plugin of ArcMap Spatial Join within Distance