Replace empty values with the next available one using FME

how can be replaced empty attributes with the next available values ?

but somehow I dont get desired results!

can somebody help me ?

The question could be a tad clearer; however one answer would be to use iteration and fmeobjects within the pythoncaller. In this way all the attribute values are shifted 'leftwards' of the given order.

Enter the following python code in a pythoncaller transformer. The self.attributelist variable is to be configured with the desired ordered list of attribute names.

If an attribute value is empty (i.e. equal to "") then iteration is used to find the next non-empty value and that value is assigned. As we are shifting, the assignor is then reset and the loop started again.

If I understand correctly... if you mean the next feature that has a value, then you can do this with the AttributeManager.

I just tried it on some parks data, and this is my setup: 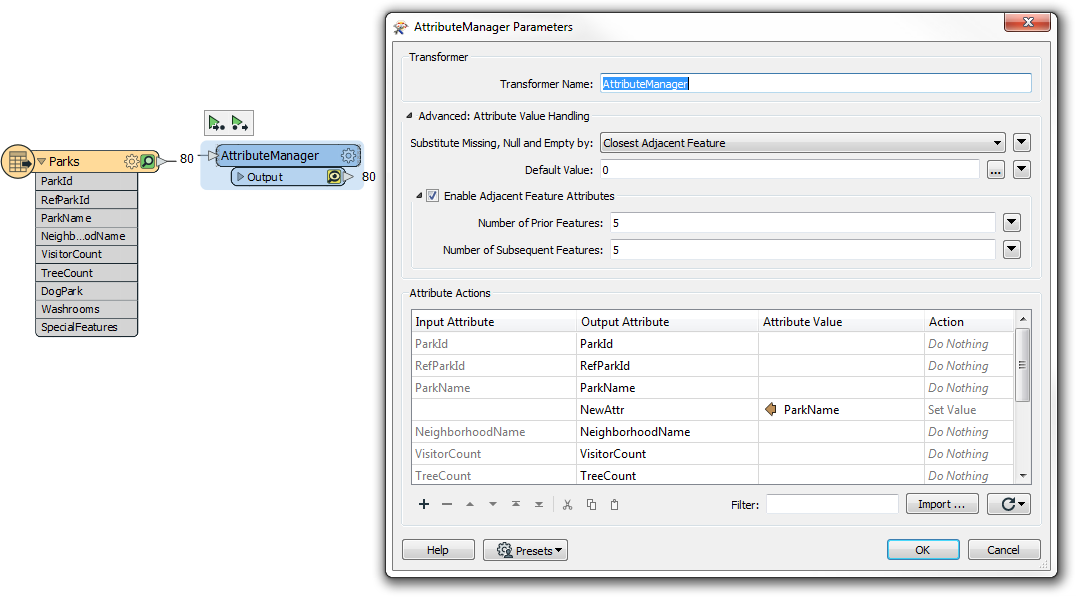 It means that when a park name is null, then it will be given the name of the nearest park (nearest in record order, not spatially).

There were three steps to set that up:

Now you'll get the correct, non-null value in your new attribute.

The alternative was just to set ParkName to the value of ParkName. That would also have worked. So why did I put it in a new attribute? It might not be an issue for you, but I used the Prior Features option. If there was a block of records all null (say features 50-59) then feature 50 gets the value from 49, then feature 51 gets the value from 50, 52 gets it from 51, etc. In other words each null record takes its value from the one that's just been set (because that's now the closest). So feature 59 would take the value of feature 58, which traces back to feature 49, when in reality 59 is closer to 60 than 49. If I make a new attribute, then the original is not affected, and records 50-54 would get the value of 49, and 55-59 would get the value of 60.

OK, that last bit's a bit of a brain-teaser, but if you don't use the Prior Features option, and just look for subsequent features it won't be an issue. I put it just in case you meant "nearest" not "next", and for any other users who happen to have a similar issue and find this answer.

Whether I understood correctly or not, I think finding adjacent values is an interesting problem, so I put together a solution and added it to the FME Hub. You can find it here: https://hub.safe.com/publishers/safe-lab/transformers/adjacentfeaturenullattributemapper

Not the answer you're looking for? Browse other questions tagged fields-attributes fme or ask your own question.