My question builds on a question previously asked (Calculating all distances from single points to multiple polygons). User @alexandre-neto provided an answer that I've worked on, but it isn't giving me the result I need. I'm new to SpatialLite and using QGIS 3.6 on a Windows OS.

I've created a SpatialLite database that has a point and a polygon layer. The point layer is the centroid of a sampling grid and the polygon layer comes from a government database called the 'Vegetation Resource Inventory (VRI)', which includes lots of data on stand age, species composition, wetlands, etc...

I want to create a new layer or a table of distances from the centroid of my sampling grid (Named: "Grid Pothole Center") to the nearest edge of the VRI polygon layer (Named: "Pothole VRI"). It looks like SpatialLite offers a way to do this. I used the following code from instructions on the link provided above:

Note: 'Grid Pothole Center' and 'Pothole VRI' have a common field called 'id'. This runs from the SpatiaLite DB manager plugin (select the database and ran the SQL statement above) without any error messages and a result is given. However, I get an empty table x with the following headings: id, id:1, distance - but no data in the table. What have I done wrong here?

qgis spatialite distance-matrix
Share
Improve this question
edited May 28 '19 at 4:28

Works for me with test data that I created according to your description. I made a successful test both with spatialite_gui program and with QGIS 3.4.4 (see the image). Is the name of your geometry column certainly "geom"? 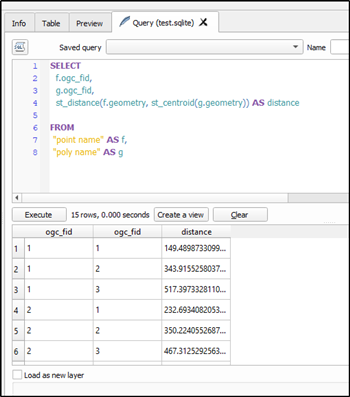 Not the answer you're looking for? Browse other questions tagged qgis spatialite distance-matrix or ask your own question.

9
Calculating all distances from single points to multiple polygons