I'm working on a project where the deliverable is a spreadsheet of point locations and needs to include Eastings and Northings in UTM Zone 15T. I usually use EPSG:26915 NAD83 / UTM zone 15N in this study area, so I was confused about the 15T. I did a little bit of reading about UTM Zones and see that N just means Northern Hemisphere, and that T is a division of the zone above 40 degrees latitude.

My question: If I use EPSG:26915 when calculating the Eastings and Northings will my values be correct for the specified UTM Zone 15T coordinate system? I'm assuming this is correct but would love to have confirmation! 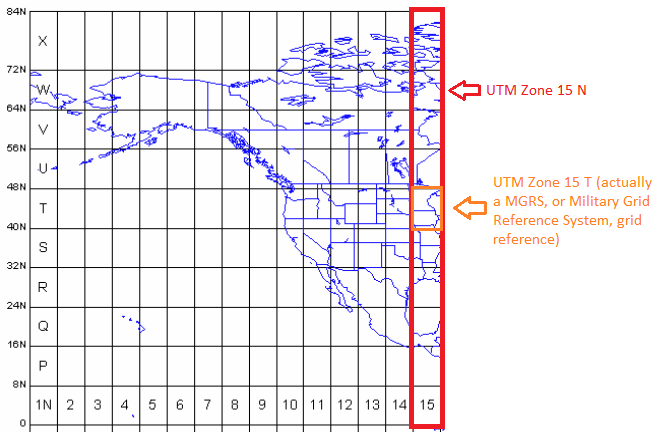 Each ‘GZD’ is divided into 100km squares, identified by a letter-pair (see illustration). Eastings and northings are then given in metres within each 100km square. (source)

The two-letter grid zones for grid zone designator 15T look like this: 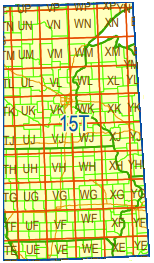 What is unclear from your description, is whether the easting and northing should be using the MGRS coordinate system, or the UTM system:

Note: Before you proceed very far with your data collection, I highly recommend testing out your coordinate collection and conversion method. Use your method to find the coordinates of a known point, then use one of the linked conversion tools to convert it to lat/long. Paste the lat/long in Google Maps (or similar tool) and make the location is correct.

Not the answer you're looking for? Browse other questions tagged utm or ask your own question.

7
Determine the UTM zone/hemisphere in a particular datum
1
Difference between ETRS89 / ETRS-TM32 and ETRS89 / UTM zone 32N
3
Using Redfearn's formula to convert between WGS84 and UTM?
0
How to know what is the correct ESPG code for clipping Landsat imagery?
1
Incorrect false northing in pyproj?
0
Converting latitude/longitude to UTM using GDA2020 datum with Pyproj