Connecting offset point symbol to its original position in QGIS

I'm drawing a track where I want to place icons (point symbols), but with an offset so that the line is fully visible. Here is an example: 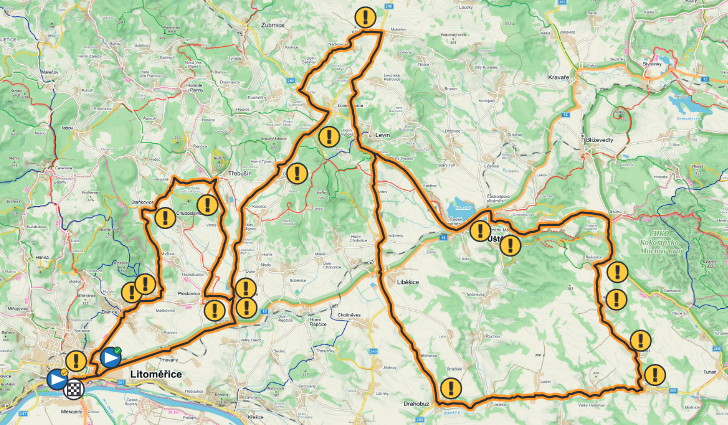 The origin is exactly on the track, therefore when zooming in and out the icons stay in a reasonable position. So far,so good.

What I need, though, is to connect the edge of the icon to the original point on the track using a line or arrow. I need this to indicate where exactly is the danger point (that is what the exclamation mark icon stands for)

Use the Geometry Generator tool with the following expression:

Then you can freely move your labels around. 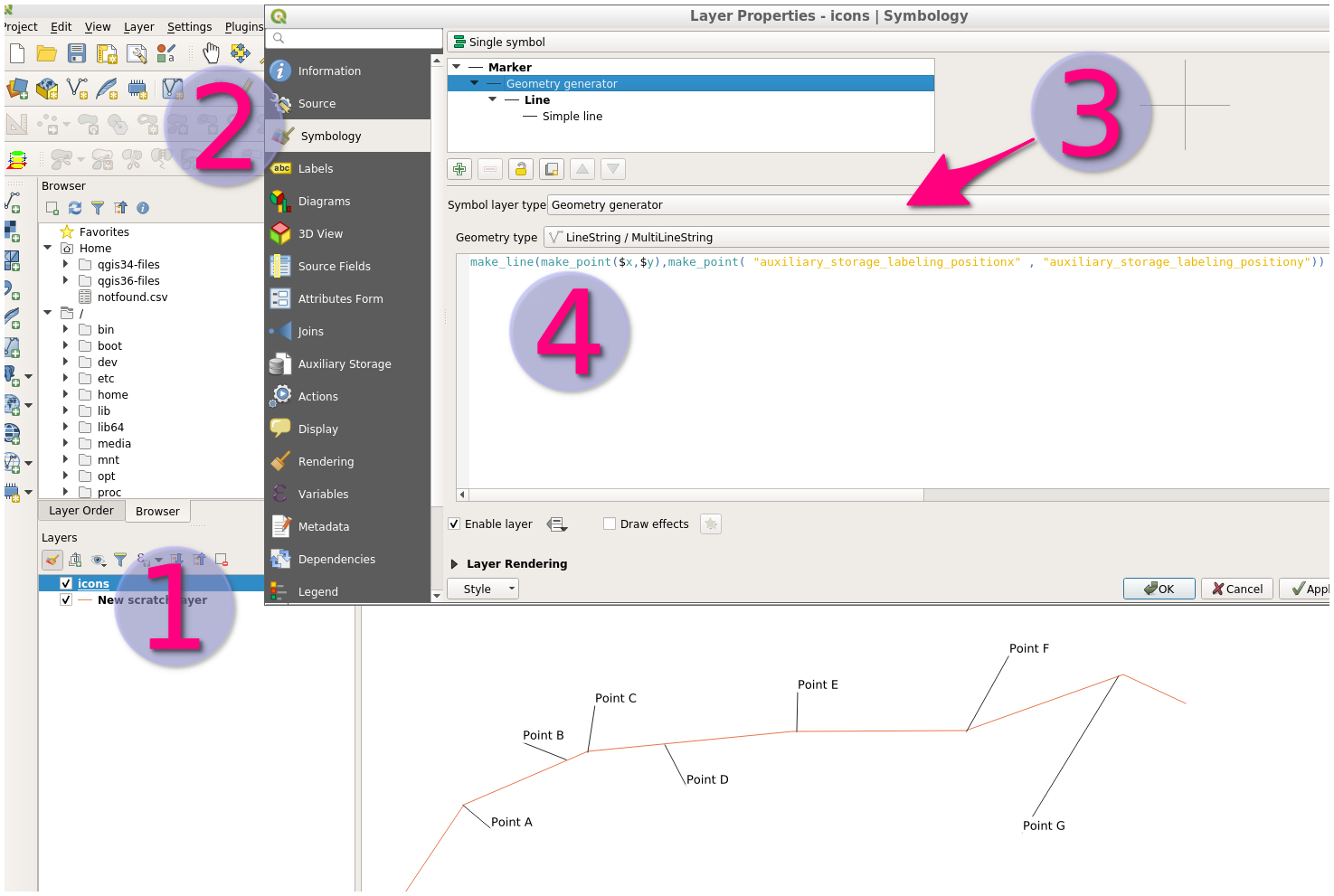 Probably better to use Labels with Callouts instead.

Similar to the Geometry Generator solution, you can freely move the Labels around after creating the Auxiliary Storage:

The easy way will be to transform your icon as label. It would be easy and stronger because it let you define blocking rules for your "icon as label" not overlap the road.

The second proposal in this question might help you to do so. The draw back is that there will be less styling option and no possibility to have start flag or play icon, but many other options exist including using emoji or wingdings font.

If you have to use an SVG icon, it will be through the styling option and need many fittings. It will not detect overlapping with other layer so manual work have to be done.

In my opinion, your icon must not be placed on a geographical location (as label positioning does) but on a location dependent on the zoom level to get always the same distance on the map between icon and point at any zooms.

For every point we will have the icon and a "callout" line. The icon will be distant from the point location. The position of the icon will be based on an distance in milimeter (the offset) and an angle defined by you. 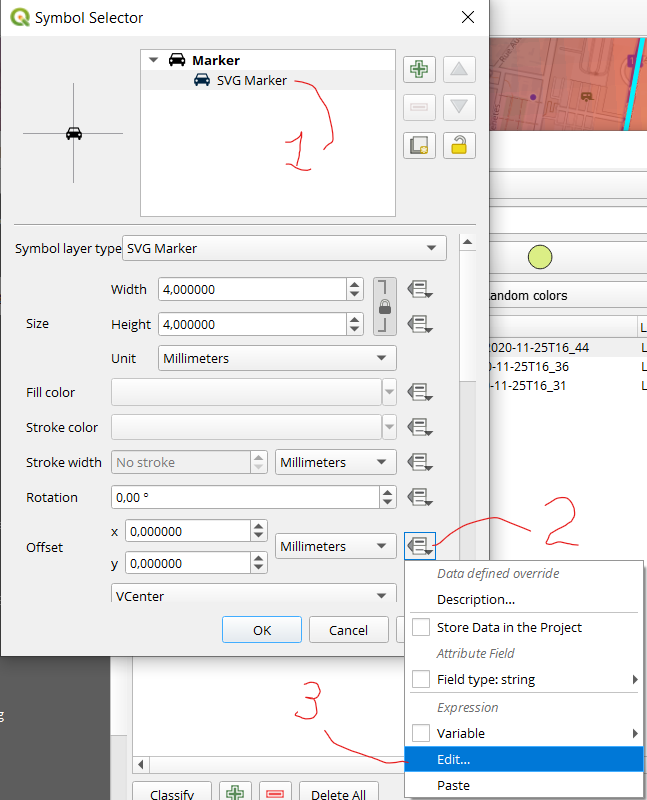 An expression string builder will pop up, replace OFFSET_CHANGEME in the formula below by the number of millimetre you want and paste it : 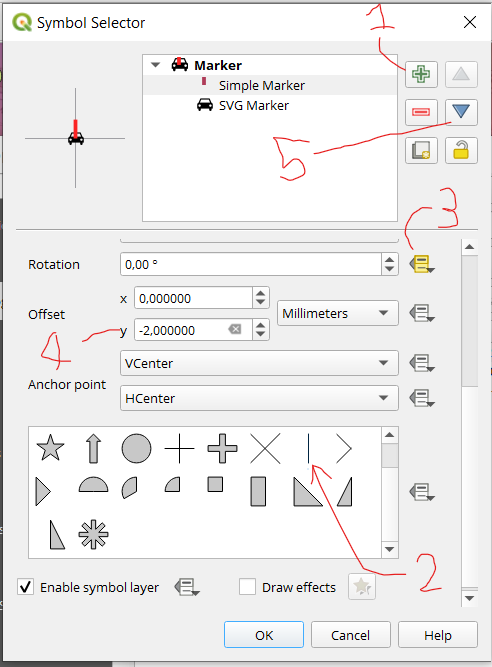 Do it for as many icons as you have defined before in your style.

Then edit the angle value in the attribute table of your point layer to not hide the line.

PS : If you have many layers and may want to adjust the offset on all layer in one action, then you can add a project variable called offset.

You can edit two point layer one containing SVG maker positions and the other containing points on the line (danger points). 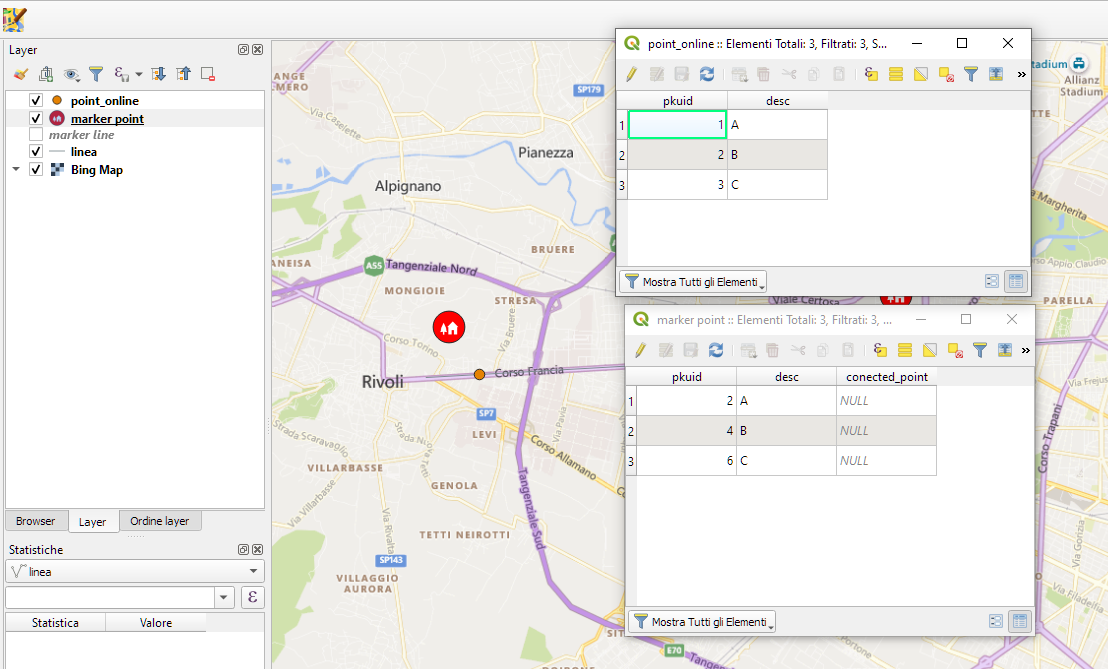 after you have to duplicate marker point layer and set the simbol as Geometry generation instead SVG. Then apply this formula:

OTHER SOLUTION WITH ONE LAYER

You can use the same logic with one layer that have both marker SVG point and both online danger points.

Table must have an attribute that you can use for join the two point, in my example is the attribute 'desc'. Marker point have value 'A', danger point related to it, have value '2A'. 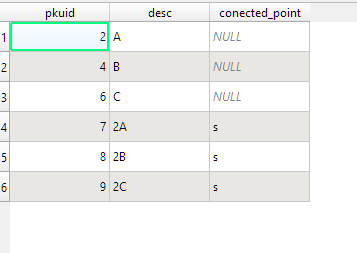 As Stile you can use a rule based stile and using attribute 'connected point' to decide if use SVG or hide the on line symbol.

Now you can duplicate the layer and apply Geomtry generation as stile:

Not the answer you're looking for? Browse other questions tagged qgis point symbology line offset or ask your own question.

6
Is it possible to display all icons and labels but not cover other icons in QGIS?

3
WMS: point "pointer" symbol with offset - getFeatureInfo search area slight mismatch
1
Resizing symbol changes its position on the map
6
Preventing Symbols offset in map from being offset in legend of QGIS?
1
Point symbol rotation in QGIS 3
2
Connecting lines with point in QGIS
1
How to calculate the azimuth of an offset point/line?
6
Is it possible to display all icons and labels but not cover other icons in QGIS?