I have an attribute table with location data for a series of individual animals. They are often found at the same locations, so I have created a column in my attribute table where I list the rock ID. The Rock Id counts are repeated for each animal in order to keep data collection simple in the field, so rock 1 for animal 1 is not the same as rock 1 for animal 2. (In any instance where two animals used the same rock - I combined the rock id numbering system for their rocks, but this was rare.) I would like to get a count for the number of times an animal is found at each rock, so I can use symbology on my map that varies in size based on this attribute. (More times an animal uses a rock, larger the symbol).

I know I can use CountIFS in excel - and then potentially import this in, but Ideally I could calculate this for the data already in ArcGIS using code and the field calculator. The summarize tool works well for telling me the unique totals with two case fields- but I would like to replicate this value in each cell. The output of that table is smaller than my original, since obviously there are some repeats.

I don't think I can do a join from this summary table, because each possible joining attribute (Rock_ID, Animal_ID) has more than one row in both tables.

A Counter is a dict subclass for counting hashable objects.

It is possible to do this using Field Calculator but I recommend using cursors instead. Adjust input fc and field names and execute in Python Window:

Example in ArcGIS Pro, it is the same in ArcMap: 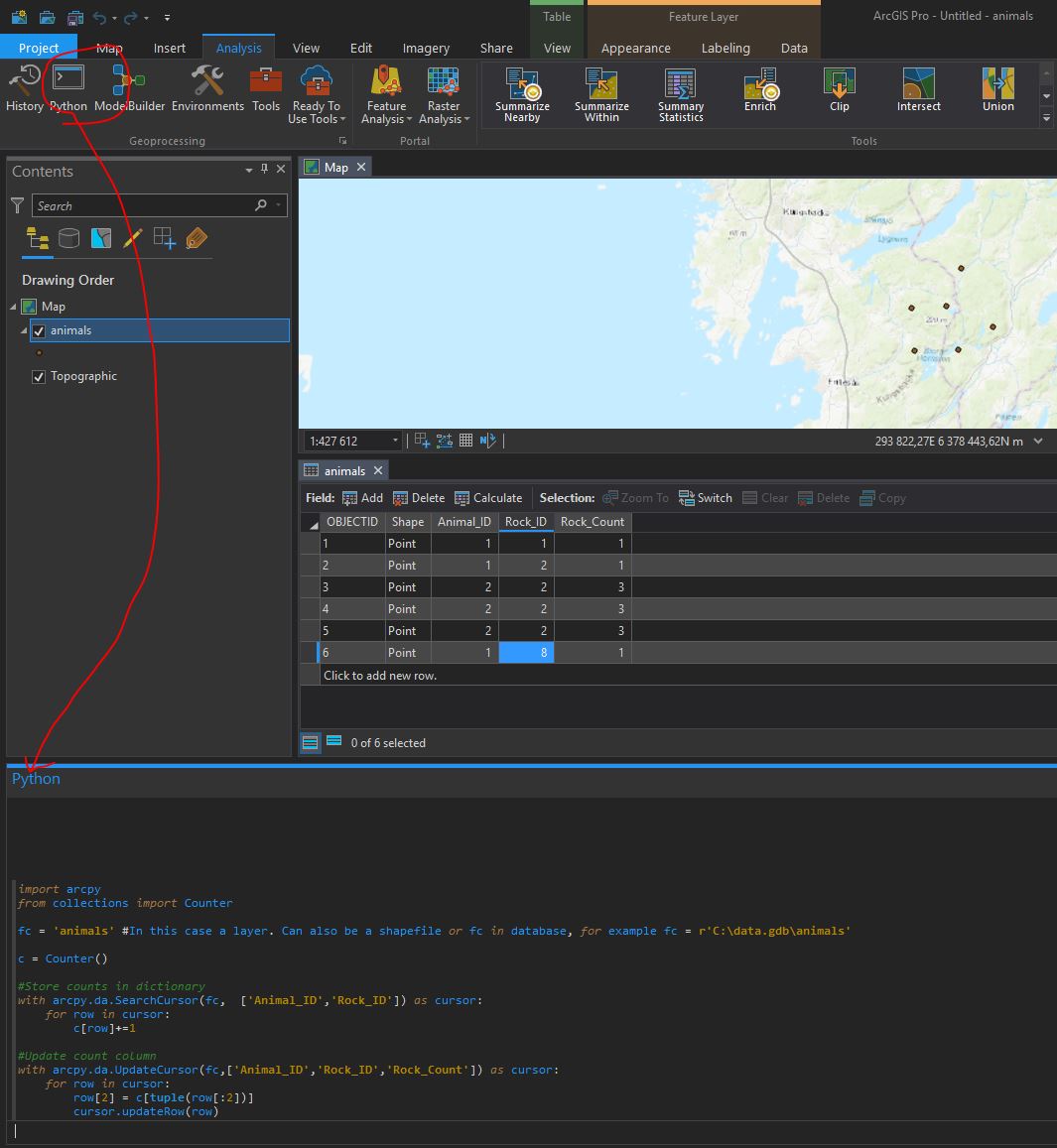 You need a field that uniquely identifies each combination of animal and rock. Then you can use the Summary tool, and join the summary table back to the original table based on that unique field. Then you can calculate the count field based on the joined summary data:

Not the answer you're looking for? Browse other questions tagged arcgis-desktop field-calculator attribute-joins or ask your own question.

1
Field Calculator If/Then in ArcGis 10.1
1
Calculating frequency and area percentage of certain type of landcover in raster data using ArcGIS for Desktop?
0
Combining non-overlapping binary rasters with ArcGIS Raster Calculator?
3
Adding certain number for each community with QGIS field calculator?
1
Using Field Calculator to assign consecutive numbers to a field based on attributes in another field
2
How to doing spatial join for several rasters
0
How do I make a field of summarized zip codes, 1 for each, put it into my data table and join the table to shapefile without losing data?
1
Adding values from different fields within same row in ArcGIS field calculator?
0
Querying multiple values in field using ArcGIS ModelBuilder?