I am currently developing an OpenLayers mapping site. Measurements can be made using a line tool, and an area tool. Both of these are currently set to calculate geodesic measurements as outlined in the OpenLayers API.

I use geodesic measurements rather than planar measurements as during user testing people questioned the tool's measurements for distances they already knew (such as driving between towns).

A new feature of the site is for a user to be able to draw a circle on the map of a set radius. OpenLayers only allows for drawing circles using planar distances, so when a user measures the circle with the geodesic measurement tool the values do not match. In the image below the circle planar radius is 10km, but the geodesic line measurement for the diameter is 12km.

Clearly this will leave a user (and myself) wondering which is correct. 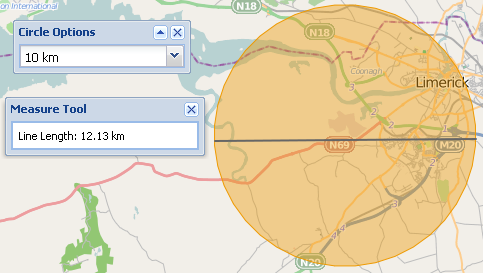 Looking at this answer it is seems most desktop GIS systems "ignore" this issue, and return planar measurements and distances. So what is the best practice in terms of user interface and accuracy to deal with planar and geodesic measurements?

I found this Google example which illustrates the issue of radii and the Mercator projection:

The JavaScript code to draw the circle is as follows:

Does this circle take the curvature of the earth into account?

If you're home-brewing in the browser, you can get a "circle" (it will not be round on the screen due to your projection; rather approximated by a polygon w/ as many points as you care to draw), use a the direct form of geodesic calculations: given a point, a direction (azimuth), and a distance it gives you the resulting point. Gory details: http://en.wikipedia.org/wiki/Vincenty%27s_formulae#Direct_Method

Looks like someone has done a translation to javascript already: http://www.movable-type.co.uk/scripts/latlong-vincenty-direct.html. Lucky you!

To finish things off:

To get a geodesic circle, you could use the buffer operation in ESRI's geometry service.

...if unit is linear such as feet or meters, geodesic buffering is performed

A freely accessible one is available here.

Not the answer you're looking for? Browse other questions tagged openlayers-2 geodesic measurements or ask your own question.

57
Calculating Latitude/Longitude X miles from point?
23
Creating circle in PostGIS
10
How does ArcGIS compute the distance between two points with a non-equidistant projection?
7
How to create a circle in arcpy
4
Why is sum of st_length() of segments 20% too big?
5
How to create Geodesic Polygons in OpenLayers?
2
Creating a circle in actual meters
1
Distances and areas in Google projection
0
Convert lat/lon into meters
1
Python: Ray-trace a WGS84 point with heading and distance
See more linked questions

2
Geodesic measurements for short distances throughout US?
3
Direct Geodesic with Point 2 Azimuth
5
Modifying straight line segments to follow geodesic / great circle paths using QGIS?
0
How to draw a circle in OpenLayers 2 and measure its radius dynamically?
1
Understanding geodesic envelope?
0
Non-iterative algorithms for direct problem in the study of geodesic